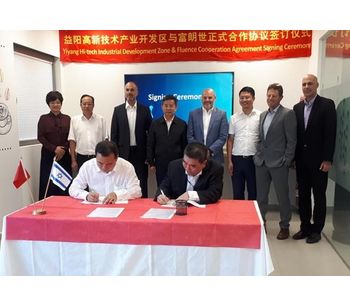 Fluence Corporation Limited (ASX: FLC) is pleased to announce that it has signed a Letter of Intent with the Yiyang High-tech Industrial District Management Committee (“Yiyang High-tech”) for the establishment of a final assembly facility for its proprietary membrane aerated biofilm reactor (“MABR”) products. The increase in assembly capacity was motivated by the Memorandum of Understanding Fluence has signed with local partner Aerospace Kaitian Environmental Technology Co., Ltd. (“Kaitian”) to serve as a preferred supplier to Kaitian for wastewater treatment equipment. Under the MOU, and subject to execution of binding purchase orders, Kaitian has indicated it is targeting orders of Aspiral™ L4 to satisfy a capacity of 40,000 m3/day or more through the end of 2021. To satisfy this potential demand, the Yiyang assembly facility will have an annual capacity of 120 Aspiral™ L4 units.

The assembly facility will be located in the Yiyang High-tech District East Industrial Zone in Yiyang City, Hunan province. The manufacturing of the proprietary MABR modules will continue in Fluence’s wholly owned factory in Changzhou, Jiangsu Province.

Yiyang High-tech has provided meaningful financial incentives to attract Fluence to the region, including substantially discounted rent, tax holidays on provincial VAT and corporate income tax, as well as direct and logistical cost subsidies over the first several years of operation. The first Aspiral™ products manufactured at the new facility are expected to be shipped before the end of 2019.

Pursuant to the MOU, Kaitian will work on a best efforts basis to procure orders of no less than 40,000 m3/day of identified wastewater treatment installations by the end of 2021, which will require MABR products to meet the growing wastewater treatment needs of Yiyang City and Hunan province. This MOU follows the successful execution of the initial pilot project with Kaitian in 2018 for the 800 m3/day Xielingang plant.

Commenting on this award, Fluence Managing Director & CEO Henry Charrabé said: “We are very pleased to further expand our position in China by signing our first LoI with a local government, thereby strengthening our relationship with the Yiyang City and our partner Kaitian. The combination of the LoI and the MOU provide us with stronger visibility for potential additional large orders for rural wastewater Aspiral™ systems. The establishment of this assembly facility will serve as a gateway to satisfy demand in Southern and Western China as modules are delivered from our Changzhou manufacturing facility and then assembled into our Aspiral™ products in Yiyang City. Coupled with the potential orders from Kaitian, this represents a very capital efficient way to secure future business and will also help to improve MABR production efficiencies in our Changzhou manufacturing facility. We look forward to a long and successful relationship in Hunan Province with the local Yiyang government and our partner Kaitian.”

Mr. Qu Hai, Secretary of the CPC Yiyang Municipal Committee and Chairman of the Standing Committee of Yiyang Municipal People's Congress commented, “After the successful operation of the Xielingang Wastewater Treatment Plant, we have seen several advantages of the Fluence MABR products: excellent nutrient removal, low energy consumption, easy operation and maintenance, etc. The introduction of Fluence and its proprietary MABR technology into Yiyang City will help accelerate further improvement of the local sewage treatment. In the future, we are willing to fully support the deepening of cooperation with Fluence, and provide a replicable model for environmental protection projects in similar areas in Hunan Province and even the whole country.”

No comments were found for Fluence to Establish China Assembly Plant with Annual Capacity of 120 Aspiral™ Units to Meet Expected Future Demand. Be the first to comment!