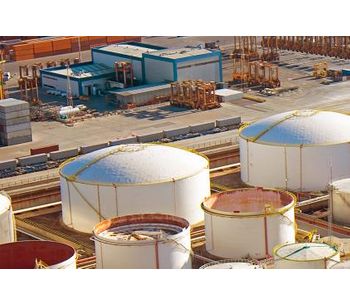 Optical Gas Imaging (OGI) is currently the preferred technology for detecting leaks and emissions of hydrocarbon compounds worldwide. This thermal camera-based technology uses an infrared bandwidth filter in the spectral absorption range of all volatile organic compounds (VOCs). American regulations, both state and federal, are transitioning from conventional methods, such as sniffers, to visualizing leaks and detection using OGI cameras [i]. The Federal Environmental Protection Agency (EPA)’s federal regulation approved in 2016 states that this is the Best System of Emissions Reduction (BSER) [ii]. In coordination with Haifa Municipality, Opgal demonstrated remote detection (up to 0.65 miles or 1 km) of VOCs using Opgal’s EyeCGas camera by observing the tank terminals of Petroleum & Energy Infrastructures (Tashan) in Kiryat Haim.

This demonstration’s main idea was to show the regulator’s ability to monitor Oil & Gas infrastructure without entering the site; an initial step in indicating the need to monitor 24/7 fugitive gas emissions in the petrochemical industry. In this demonstration, from the roof of a school, it was possible to scan the storage tanks at Tashan’s site using three EyeCGas cameras in different hardware and software configurations (for research and development purposes). First, the Opgal team scanned the tanks westward, and the EyeCGas cameras saw no visible emissions. The tanks to the southeast were examined next, again with no visible emissions. At 1:50 pm, the cameras scanned in a southwesterly direction into the low winter sun; immediately, there was a visible emission of VOCs in all the cameras (Figure 1), despite the unfavorable observation conditions in front of the sun. 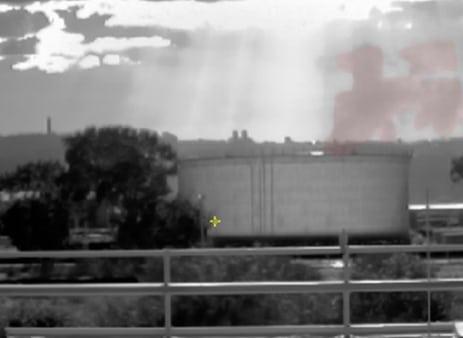 Everyone present on the roof of the school smelt a strong odor for several minutes. The emission event lasted as long as the team was on the school roof until 2:30 pm.

It was not initially clear from which tank the plume emitted; however, an additional camera looking at the tanks from a different direction would have helped determine the leak’s location.

According to the plume’s speed and the moderate wind, it’s possible to estimate that the cloud came from one or two nearby tanks (at a distance between 250 and 350 meters from the camera location, see Figure 1).

The nearest tank is inactive, but the camera shows a shallow liquid level at the bottom of that tank as a dark layer, with a cooler temperature than the rest of the tank wall (Figures 2 and 3).

Opgal in the Field of Gas Discovery 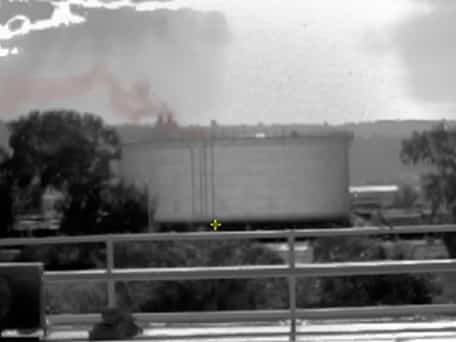 EyeCGas is intrinsically safe and complies with the EPA’s “Quad Oa” (OOOOa) regulations. EyeCGas is used globally for LDAR compliance. 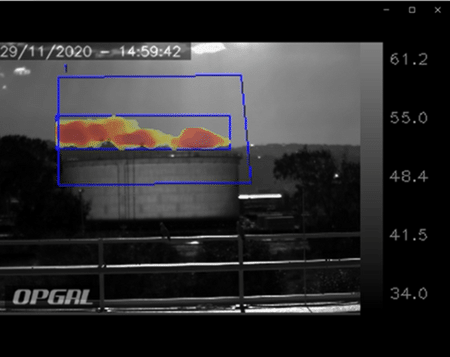 Automatic detection algorithm applied to the EyeCGas image taken at the Tashan site, showing the gas emissions in color and automated alerts.

Opgal has recently developed a unique remote detection capability and can cover a tank farm’s vast area with a few stationary cameras.

During the test phase, the Opgal team demonstrated a ten-kilometer controlled venting event detection capability at an offshore rig.

If you have any questions or clarifications, you can contact Dr. Ram Hashmonay, Principal Innovation Scientist, Industrial Division at Opgal.

No comments were found for Gas Emission Monitoring at Tank Farms and Terminals. Be the first to comment!