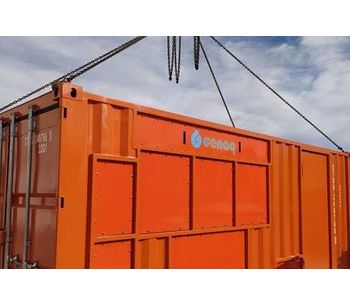 If there is something that especially characterizes GENAQ, it is its technology. Since 2008, we have been investing in the research, development and industrialization of atmospheric water generators, offering the market a variety of water generation units as well as customised developments for specific needs.

As a result of this development, the 4th generation of GENAQ water generators is already in operation in more than 35 countries around the world (US, Africa, South America, Middle East,…).

Among our projects, those developed in the emergency sector stand out, such as atmospheric water generators installed at the US Army Military Base with a generation capacity of 500 and 5000 liters per day, in the detachments on islands of the Malaysian Army to replace bottled water, at the Nigerian Navy Base with portable generators for various locations, at the Border Control Camp in Panama supplying water to employees, in Hurricane Maria in Puerto Rico in 2017 as an emergency response for the supply of drinking atmospheric water in the face of this catastrophe and in various locations under the command of the United Nations in response to disasters.

Our CUMULUS range has characteristics adapted to the response to disasters such as reinforced structure, mobility functionality by wheels, adaptation to transport with pallet truck and crane, and integration with generator set. Therefore, they are a great option, in these complicated situations, to provide water and, most importantly: drinkable. Three out of ten people in the world do not have access to drinking water and we speak of a basic need to survive in emergency situations.

No comments were found for GENAQ: TOP technology for defense and emergency response on five continents. Be the first to comment!