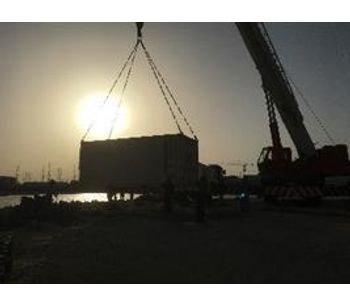 Finding the balance of a clean intake seawater system and the prevention of biofouling growth on the reverse osmosis (RO) membranes, presents significant operational challenges for SWRO plant owners and operators. H2O BFS was contracted to define the optimal biofouling control procedure to control marine biofouling at the seawater intake, without resulting in a counter effect on the RO membranes resulting in increased bacterial growth. The study was carried out at two SWRO plants in the Kingdom of Saudi Arabia, Al Khafji SWRO and Al Fatah Jubail SWRO Desalination plant. Both located on the Arabian Gulf.

Seawater is collected from the surrounding Arabian Gulf. With seawater, a variety of marine fouling organisms enter the intake system. Intake structures are in general ideal environments, providing optimal conditions for settlement and growth of biofouling organisms and for this reason a biocide is introduced at the seawater intake. However, the use of hypochlorite to control biofouling should be minimized to prevent increased fouling on the RO membranes. Therefore  continuous dosing is not the preferred option. Shock dosing has been trialed and has been found not to be effective in preventing marine growth in a seawater intake system. For this reason an effective (non-continuous) dosing regime to prevent marine growth in the intake system and prevent increased bacterial growth at the membranes is required.

By measuring their response to biocides, the most effective dosing time interval and concentration can be determined. Ecodosing is a proven method of biofouling growth prevention and has been applied at many different industrial sites around the world over the past 20 years.

H2O Biofouling Solutions carried out a study at both SWRO plants using their mobile laboratory to determine the Ecodosing regime. Biofouling organisms were collected from the surrounding sea and used in the test laboratory. After four weeks of testing, the optimal time interval and free chlorine concentration to prevent marine growth was defined and implemented at the seawater intake.

The Ecodosing chlorine dosing regime was implemented in September 2017. The required amount of chlorine dosed could be reduced with 50% in comparison to an effective continuous chlorination. A biofouling monitor was installed to provide operators with real time insight into any risk for biofouling settlement.

In the past 1,5 years of operation the seawater intake system stayed clean and free of marine growth. This was also noted in the biofouling monitor. There was in addition increased differential pressure (dp) or increased CIP frequency observed compared in a previous period without any hypochlorite dosing at the intake.

These projects have shown that Ecodosing can also be applied at SWRO plants to prevent marine fouling in the seawater intake system without resulting in increased fouling levels at the RO membranes. This could be a major step forward for SWRO plants who struggle finding the optimal balance in biofouling control. The results will be presented at the IDA world congress in October 2019 in Dubai.

No comments were found for Optimal biofouling control balance at SWRO plants according Ecodosing. Be the first to comment!