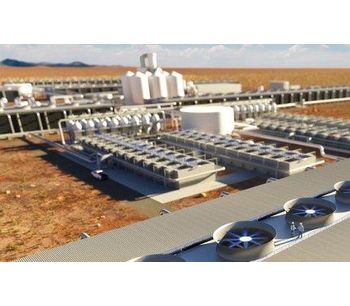 1PointFive’s mission is to reduce the amount of carbon dioxide (CO2) in the atmosphere using Carbon Engineering’s DAC technology. This technology provides a pathway to bolster Paris Agreement-aligned efforts aimed at limiting increases in global temperature to 1.5 degrees Celsius. In 2018, the Intergovernmental Panel on Climate Change (IPCC) issued a report indicating that, in addition to significant emissions reductions, removing atmospheric CO2 is necessary to attain the 1.5 degrees Celsius goal.

“The formation of 1PointFive is a significant catalyst that will advance our plans to build the world’s largest-scale DAC facility to remove substantial volumes of carbon dioxide emissions from the atmosphere,” said Richard Jackson, Oxy Low Carbon Ventures President and Chairman of 1PointFive. “Occidental has over 40 years of carbon dioxide management experience, and Oxy Low Carbon Ventures is applying our technical ingenuity and engineering skill to help make large-scale DAC facilities a reality. This is an important step toward realizing our vision for a new, sustainable low-carbon economy, and we are dedicated to working with Rusheen and Carbon Engineering to ensure this critical technology becomes a global emissions reduction solution.”

As announced in May 2019, the engineering and design for the first facility to be built through this agreement is already underway. Today, the companies released a ‘first look’ at the design of the plant which, when operational, will be the largest DAC plant in the world, capturing up to one million metric tons of atmospheric CO2 annually. Currently, the world’s largest individual DAC facilities have the capacity to capture several thousand tons of CO2 per year.

The facility will be located in the Permian Basin with a land footprint of approximately 100 acres. More than 25,000 hours of Carbon Engineering, Oxy Low Carbon Ventures, and contractor time has been completed on the design and development work so far. The final Front-End Engineering Design for the facility is slated to begin in the first quarter of 2021 with construction expected to start in 2022.

The CO2 captured at the facility will be permanently, safely and securely stored deep underground in geological formations by Occidental. It will be used in lower-carbon oil production, which permanently stores CO2 as part of the process, and for geologic sequestration to deliver permanent carbon removal, a solution to counteract hard-to-eliminate emissions and help businesses achieve their net zero targets. With DAC, atmospheric CO2 can also be used as a feedstock to create low-carbon products like plastics and concrete.

Occidental has been permanently storing CO2 for more than 40 years, with nearly 20 million metric tons sequestered in its operations annually. The company has two U.S. Environmental Protection Agency-approved monitoring, reporting and verification plans to validate the integrity, transparency and permanence of the entire sequestration process. Occidental’s contributions to the venture include engineering, project development and other technology performance assistance that will provide support for the development and financing of the DAC plant.

“The Carbon Engineering business model is to license our technology to developers around the world to enable rapid and widespread global deployment of DAC technology,” said Steve Oldham, Carbon Engineering’s CEO. “This partnership marks Carbon Engineering’s first licensing agreement in the U.S. and is a critical next step in the commercialization of DAC technology. It will prove the technology at large, climate-relevant scale, validate the cost, and demonstrate that DAC is now a feasible, available and affordable tool that can be added to the global climate toolkit. It will also allow Carbon Engineering to grow and meet the increasing demand for carbon removal from the private and public sectors. We are looking to replicate this licensing model in other markets around the world so we can deploy DAC as quickly and broadly as possible, and start to make a meaningful impact on the huge climate challenge.”

The agreement between 1PointFive and Carbon Engineering, as well as the partnership’s first commercial facility, is enabled by effective market-based policies in the U.S., such as the California Low Carbon Fuel Standard and Federal 45Q tax credit. The continuity and growth of practical carbon-related policies will continue to encourage the establishment of a widespread DAC industry.

“We have an ambitious goal for 1PointFive  – to help the world limit global temperature rise to 1.5 degrees – but we also have a powerful and practical vision for what needs to be done,” said Jim McDermott, 1PointFive’s CEO and Founder & Managing Partner of Rusheen Capital Management. “Assessments by major organizations such as the IPCC and the National Academy of Sciences are increasingly clear that to avoid the dangerous impacts of climate change, we will need to remove billions of tons of CO2 from the atmosphere. A global DAC industry will be key to achieving this. It will also bring significant economic benefits, leading to the development of new industries and thousands of jobs.”

About Carbon Engineering:
Founded in 2009, Carbon Engineering (CE) is a Canadian-based clean energy company focused on the deployment of Direct Air Capture (DAC) technology that captures carbon dioxide (CO2) directly from the atmosphere so it can be permanently stored deep underground or used to produce clean, affordable transportation fuels. From a pilot plant in Squamish, British Columbia, CE has been removing CO2 from the atmosphere since 2015 and converting it into fuels since 2017. More information can be found at www.carbonengineering.com.

About Rusheen Capital Management:
Jim McDermott and Jeff Green, the principals of Rusheen Capital Management, have a long and successful track record in investment, commercialization and project development for sustainable technologies. Their goal is to create a carbon-to-value economy where sustainable companies can grow and contribute to a low-carbon future. With involvement and investments in carbon capture, utilization and storage (CCUS), renewable energy, biofuels and water sustainability, Rusheen is focused on decarbonization, resource efficiency and leveraging waste streams as new resources. For more information, visit www.rusheen.com.

About 1PointFive:
1PointFive’s mission is to become the leading developer of Direct Air Capture facilities worldwide. A partnership between Oxy Low Carbon Ventures and Rusheen Capital Management, the company merges Occidental’s leadership in carbon management and carbon dioxide storage with the commercialization prowess and carbon-to-value vision of Rusheen. The company’s vision is to leverage these unique strengths to deliver Carbon Engineering’s Direct Air Capture technology on an industrial scale throughout the United States. For more information, visit www.1pointfive.com.