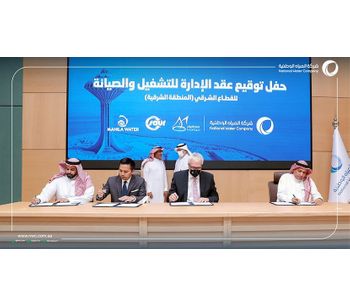 The Saudi National Water Company (NWC) has awarded two contracts to the private sector to manage the operation of water and environmental treatment services in the Central and Eastern clusters. The total cost of the contracts between NWC and the two alliances is 579 million Saudi riyals ($154 million).

The first contract worth SR358 ($95mn) was signed with Saudi Al-Khorayef Alliance and French Veolia to provide operation and maintenance for the Riyadh region.

The other SR221 million ($72 million) contract was signed with the Saudi Miahona Alliance, the French group Saur and the Philippine company Manila Water for the operation and maintenance of the Eastern Cluster.

Eng. Mohammed bin Ahmed Al-Mowkely, NWC CEO, said “One of the most important foundations of Saudi Arabia's Vision 2030 is the well-being of citizens and the quality of services provided, which gave rise to the National Water Strategy 2030. Based on this, the NWC strategy has been adopted and detailed plans have been developed to improve water services in the Kingdom with the participation of the private sector.

'We have successfully completed the 100% structuring of water services in the Kingdom and consolidated 13 administrative areas into 6 clusters under the umbrella of the company. The latest cluster was established in early November 2021,' as the northern cluster, which includes four administrative areas: Qassim, Hail, Al Jouf and the Northern Border. Thus, all Saudi regions will be fully managed by the National Water Company'.

The company is now working on awarding management contracts for the remaining clusters, namely Western, Southern and Northern ones, which will be completed by the end of December 2021, and that the alliances that will win these contracts will be announced in due course.

Al-Mowkely explained that the contracts are contingent on the alliance achieving 14 key performance indicators. The most important of these are improving and enhancing the customer experience, increasing operational efficiency by rationing costs, reducing water losses, and improving network management. He pointed out that the contract period is 7 years. If the targets are met after the third year and the readiness of the sector is increased, NWC can move directly to the concession contract phase where the private sector takes full responsibility for water services and then we will not wait until the end of the seven years.

No comments were found for Saudi’s NWC awards two water contracts worth US$154. Be the first to comment!