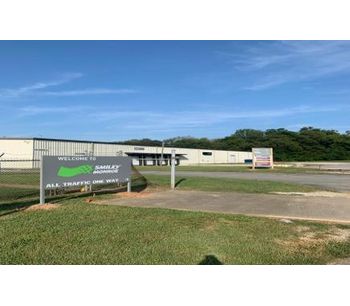 Smiley Monroe, a conveyor belt and rubber parts manufacturer, opened its first U.S. production center in Franklin, Kentucky, in response to demand from its growing customer base in the region.

The Northern Ireland-based manufacturer has been producing two of the brand’s core products – hot vulcanized Endless conveyor belts and Zip Clip replacement belts – in its new 65,000-sq.-ft. facility since April.

The company’s U.S. operation is headed by plant manager Morgan Walker, who has held a number of leadership roles since joining the family-owned business as a site service team leader. Ryan Wright, who serves as international sales manager, remains responsible for North American sales and business development.

“Manufacturing in America, for America was a natural strategic move, and having a base in Kentucky means we can offer just-in time delivery to our American customers,” says Chris Monroe, president of Smiley Monroe Inc.

Marketing director Tim Monroe says the company is focused on manufacturing its Zip Clip replacement belts as a result of listening to its U.S. customers talk about the problem of machine downtime and the amount of time and money wasted waiting for service crews and spare belts to arrive on-site. According to Tim Monroe, the belts made at the new Kentucky facility make it easy to maximize conveyor uptime, increase efficiencies and reduce running costs.

“In Zip Clip, Smiley Monroe is bringing fresh thinking and something genuinely new to the American market, while being well-placed to satisfy volume demand for high quality and competitively priced chevron conveyor belting which is often in short supply in the American market,” Chris Monroe says.

Co-founded 40 years ago by Vaughan Monroe to provide conveyor belts and a vulcanizing service to local quarries and mines, Smiley Monroe now exports to more than 60 countries worldwide, across 10 equipment sectors – ranging from quarrying, construction and demolition and environmental to agricultural, recycling and waste management and road construction.

No comments were found for Smiley Monroe opens first US production center. Be the first to comment!