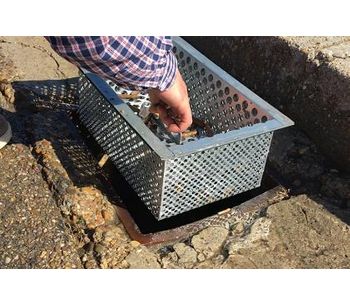 SUGARFILTER is the new IVERNA filter for installation under scuppers, gutters or storm drains.

Due to the presence on the roads of waste, natural residues and water erosion, often objects such as bottles, cigarette, tree leaves and sand cause the obstruction of rainwater receptors, such as scuppers and storm drains, which directly produce small floods generating socio-economic damage and discomfort to citizens.

In addition, the climatological behavior of rainfall in Spain is usually short but intense, this phenomenon produces high peak flows in surface, which many times produce small floods if the collecting elements are not in perfect condition,

IVERNA has developed a waste retainer to incorporate into storm drains and scuppers, securing it bellow the lid or grid itself. In this way IVERNA proposes a solution for the small floods that occur on the roads when the scupper is obstructed by dirt. The SUGARFILTER design does not reduce the usable drainage section and allows the water to be evacuated, even if the filter is full. Furthermore, ergonomics and ease of dismantling have been prioritized for efficient cleaning.

Some of the SUGARFILTER features are:

• Two-stage filter: it consists of two filters with holes of different diameters and a cone-shaped design that allows the evacuation of water to the network as it fills.

• It has a handle to comfortably extract the two filters and dispose the dirt simply by dumping them into a container.

• It allows to have a cleaner sewage and avoid bad odors coming from sulfide of hydrogen and methane.

• Prevents the arrival of waste that serves as food for animals that live in the network like rats and cockroaches.

IVERNA also offers FUNDILOCK as an optional safety accessory. An anti-theft device in stainless steel or galvanized steel covered with high-impact non-slip plastic, which protects any cast iron product on the road and prevents the removal of any storm drain, grating, manhole cover, casket or equipment housed under them.

No comments were found for SUGARFILTER - The filter for storm drains by IVERNA. Be the first to comment!