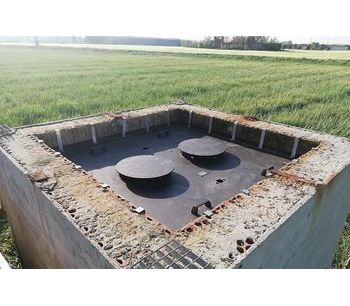 Today we wanted to highlight the case of the company AQUONA SAU in charge of the exploitation of the Water Service in Ciudad Real.

The odor problem came this time from the chimney that acts as an aeration outlet for the well that connects with the Ciudad Real outfall. The Ciudad Real outfall collector has a diameter of 2500mm and an average daily volume of 18,000 m3 / day. The critical issue was its hydrogen sulfide (H2S) concentration, which at the point of the aeration outlet is usually 10ppm with specific peaks above 27ppm. The damages that the concentration of this hydrogen sulfide can cause are very diverse and severe:

• Between 3 and 5 PPM: Strong smell of rotten eggs.

• Between 50 and 100 PPM: Irritation of the respiratory system.

The main function of SUGARPOD is to neutralize the negative effects of odors from urban sanitation. The device consists of a filter with a HDPE chamber with an active carbon bag inside that performs the filtering power. Its stainless steel supports and its rubber gasket allow a watertight, quick and simple installation.

Some of the main features of the SUGARPOD activated carbon filter:

• Safe, fast and easy to install and maintain.

• The device neutralizes odors immediately after being installed.

• Carbon-based material is activated by thermal decomposition using a controlled atmosphere and heat.

• The resulting product has a large surface area per unit volume, and a network of microscopic pores where absorption takes place.

We have filters in a multitude of standardized sizes to adapt to practically any situation:

• Round / square filters for installation in chambers and manholes.

• Chimney filters for installation in septic tanks and pumping stations.

The aireation case in Ciudad real was unconvencional. Aeration was made through a venting concrete chimney with a square size of 1.5x1.5m. IVERNA had to customize and adapt the filter developing a perfectly watertight filter with a double activated carbon chamber to ensure optimum effectiveness.

IVERNA continues accumulating satisfied customers year after year. Since the SUGARPOD activated carbon anti-odor filter was launched in 2017, there are already dozens of companies that have solved unpleasant and annoying odor problems from sewers, septic tanks, landfills or pumping stations.

This product has already attracted the interest of a multitude of water companies in Spain and is distributed with the collaboration of various partners in various countries in Europe and Latin America such as Ecuador, Chile, Mexico or Argentina.

Do not hesitate to visit our website to obtain more information about our anti-odor filters: http://iverna2000.com/inicio/sugarpod-filtro-carbon-activado-para-fosas-septicas/

No comments were found for SUGARPOD: Anti-odor filter with activated carbon - New success case in Ciudad Real. Be the first to comment!