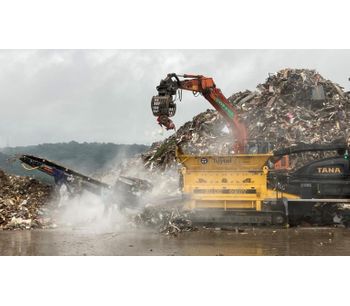 After the flooding which caused a lot of inconvenience in the Netherlands and especially in Limburg, a huge mountain of waste was also generated in Belgium. In Wallonia, for example, hundreds of thousands of tonnes of waste have already been disposed of, and the clearing of the debris seems far from finished. Every day, a few thousand tonnes are added: from broken furniture to electronics and from washing machines to mattresses. It is expected to take months to process all the waste. Until then, everything is dumped on an industrial estate in Wandre near Liège. From the Netherlands, the company Tuytel is present at this location with the TANA Shark shredder: a shredder that can shred almost all materials.

“We see refrigerators that are still filled,” says site manager Roland Wolfs. “But also photo albums. It is really people’s lives passing by before your eyes. Very sad.” According to Wolfs, lack of space is mainly a problem in the short term. Not the shredding or the disposal. “But there is a lot more waste coming in than going out. Of course we want to get rid of it as soon as possible, but I think we are looking at five or six months.” The vast majority is ground up and then burned or buried in the ground.

No comments were found for TANA Shark shreds enormous waste mountain – Recycling Magazine Benelux 5/2021. Be the first to comment!