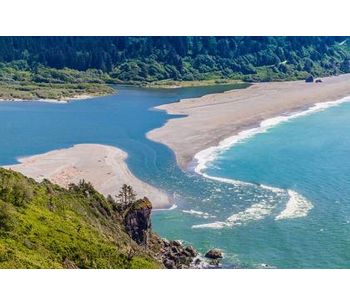 The United States Geological Survey (USGS) California Water Science Center has taken delivery of the LISST-200X particle size analyzer at their Sacramento facility.  The instrument will be used initially for establishing baseline analysis data for suspended sediment concentration and particle size distribution within the Klamath River.  The LISST-200X is designed for providing in situ particle measurements in both fresh and salt water environments.

The 254 mile Klamath River originates on a plateau east of the Cascade Range in Oregon, and travels through California before exiting into the Pacific Ocean (The Oregon Encyclopedia). It is the second largest fiver in California and drains a watershed of almost 15,000 square miles. Dubbed “A River Upside Down” by National Geographic Magazine, the Klamath begins in the high desert and flows towards mountains, unlike most rivers. While much of the upper basin today has been turned to cropland, the lower basin is protected as a wildlife refuge (The Oregon Encyclopedia).

The Klamath was once the third largest salmon-producing river on the West Coast (NOAA). Its salmon, steelhead, and rainbow trout have adapted to its high water temperatures and acidity levels relative to other rivers in the PNW (Native Fish Society). From the 1920s to the 1960s, four hydroelectric dams were built by the California-Oregon Power Company (COPCO) and its successor PacifiCorp on the Klamath River main stem, blocking salmon and steelhead trout migration and trapping sediment that formerly replenished downstream gravel bars used by spawning salmon. In the Lower Klamath Basin, for instance, the Shasta River sported between 50,000 and 100,000 Chinook salmon per year (Native Fish Society). Today, only about 5,000 salmon return to the river. The decline in fish populations has impacted tribal, recreational, and commercial fisheries and the communities and economies they support (Native Fish Society).  Tribes, nonprofit organizations, private landowners, and federal, state, and local government agencies have worked together across the Klamath River region over the past 20 years to promote restoration projects; the Klamath is now slated to be the largest dam removal project in U.S. history (NOAA).

No comments were found for USGS Takes Delivery of LISST-200x to Collect Klamath River Data. Be the first to comment!