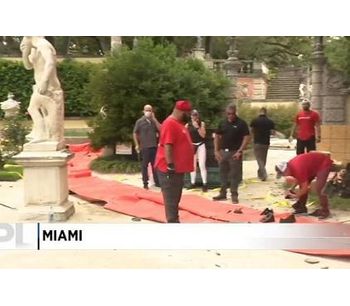 Miami -- After a powerful hurricane left devastating damage to Miami’s historic Vizcaya Museum and Gardens, the historic estate has unveiled a flood mitigation system they hope will prevent any future water damage.

The unveiling of the new system, Tuesday, comes after the historic estate, which dates back to the early 20th century, suffered extensive flooding during Hurricane Irma nearly four years ago. The stunning estate, although beautiful, was devastated after hurricane Irma due to severe flooding.

Now, with the next hurricane season beginning just weeks away, they have set up a brand new flood mitigation system designed to keep this historic site dry in the event of another major storm.

One by one, workers at the historic Vizcaya Museum and Gardens took the wraps off their new flood-prevention system known as the “Tiger Dam.”

“So the beauty of this system is that it’s temporary,” explains Vizcaya Museum and Gardens Deputy Director, Ian Simpkins.

Simpkins says the “Tiger Dam” system was chosen in part because of its flexibility, as well as durability.

“The beauty of this system, as opposed to others that we looked at, is because it does have ‘give’ to it, because it’s inflated with water,’” says Simpkins. “So, if something hits it, it’s not going to dent or break.”

The fact that it’s temporary and has a certain amount of “give’ to it is an important consideration for the historical site, which was left covered with water following the hurricane.

“During Hurricane Irma, the entire gardens flooded with saltwater and debris, and it was a significant amount of damage,” says Simpkins.

However, the roughly $200,000 flood mitigation system is covered by grants from FEMA and the Florida Department of Emergency Management.

“While it had a somewhat hefty price tag, considering the amount of money that we had to spend on labor, debris removal, and so on, it was small change,” adds Simpkins.

Following Tuesday’s unveiling of the system, the “Tiger Dam” will then be put into storage and will only be brought out if a major storm is approaching. The system must be set up at least 48 hours in advance.

No comments were found for Vizcaya Museum unveils new flood mitigation system ahead of hurricane season. Be the first to comment!