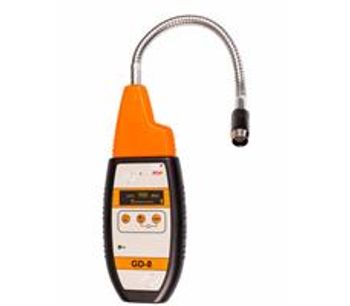 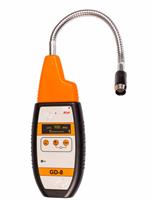 The GD-8 dual gas detector is a user-friendly device for detecting two gases simultaneously: the natural gas and LPG, or other explosive gases (at customer's request). The detector features a semi-conductor, highly sensitive sensor operating up to 10,000 ppm and capable of detecting even lowest concentrations of gases. The device's OLED display is easy to read and shows the concentration of the currently measured gas. The detector can present the measured values in ppm or %LEL. Another great feature of the device is that the concentration is also displayed with a pressure gauge.

The display also shows the battery charge level and can signal problems, such as a discharged battery or a damaged sensor. The detector is powered from a rechargeable, 2250 mAh Li-ion battery with no memory effect. The battery is good for up to 10 hrs of continuous operation. The detector comes with a dedicated charger. The charging progress is signaled with an LED in the detector's keypad. The device also features a buzzer. Every time a threshold is exceeded, the frequency of the sound generated by the buzzer changes (the higher the concentration, the higher the frequency of sound) and a message is displayed. The auto-reset function (disregarding background concentration) is another great feature, letting you pinpoint leaks in rooms with permanent gas concentration at some level.

The detector has been designed to identify leaks in places where the concentration may become dangerous. Most of all, the detector can be used for checking gas systems in houses or apartment blocks, public utility systems, industrial installations and for inspecting boiler rooms, gas meters, etc.

Depending on the intended use, the detector is available in three variants:

No reviews were found for Alter - Model GD-8 - Dual Gas Detector. Be the first to review!