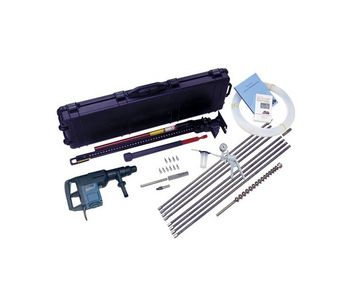 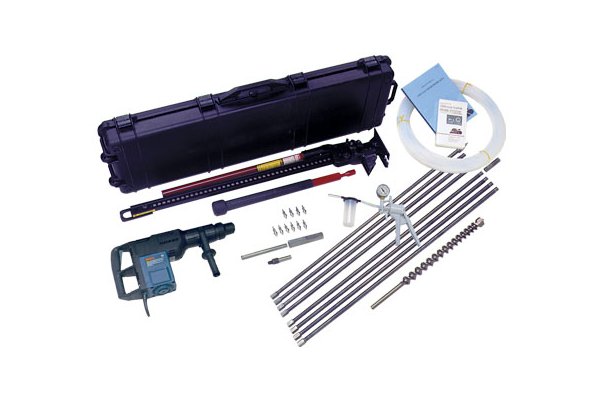 Excellent for monitoring and sampling hydrocarbon spill sites, underground storage tanks and pipelines. AMS GVP kits use an AMS slide hammer or an electric rotary drive hammer and GVP drive extensions to insert a stainless steel GVP tip to the desired sampling depth. Fluoropolymer tubing is attached to a barb fitting on the GVP tip for remote sampling from the surface. Two GVP tips are available for use with AMS GVP kits – dedicated gas vapor tips, and the AMS Retract-A-Tip.

AMS GVP kits use an AMS slide hammer or an electric rotary drive hammer and GVP drive extensions to insert a stainless steel GVP tip to the desired sampling depth. Fluoropolymer tubing is attached to a barb fitting on the GVP tip for remote sampling from the surface. Two GVP tips are available for use with AMS GVP kits – dedicated gas vapor tips, and the AMS Retract-A-Tip.

The Gas Vapor Probe System is the finest system available today for environmental assessment and monitoring. It is available as a series of kits from a Basic Kit without a drill to a Heavy Duty Kit that also includes AMS Flighted Augers. Used for collecting samples of soil gas at shallow depths. Tips are offered in a dedicated tip or a retract-a-tip, which is removable.

The AMS Gas Vapor Probe has been designed specifically for placement of devices used to recover soil gas samples. The GVP kit may also be used for collection of soil and groundwater samples when used with accessory screens that are sold separately.

The site should be surveyed for the presence of underground utilities, pipelines, underground tanks and piping, as well as other structures or objects. The position of underground objects should be flagged and/or marked to local protocols. Use the electric drill with 1 1/2” Concrete Bit to cut a hole in the pavement if necessary, prior to using the tile probe. Once the pilot hole has been made, proceed sampling using the GVP points. Following the determination of sample collection depth, cut a length of Flouropolymer tubing slightly longer than collection depth. This extra length is to aid in the ease of sampling with tip installed. Attach one end to the barbed nipple on the selected sampling tip. Assemble from the sampling tip up. Place the assembled sampler, comprising tip assembly, extension, and extension drive adapter tip downward into the hole prepared by the Tile Probe. Certain soil conditions may allow for the assembled piece to be driven directly into the soil itself. Driving may be accomplished via AMS Slide Hammer, or electric rotary hammer drill. Once the first extension has been lowered or driven into the ground, place at clamp (not supplied) at ground level to stabilize it. Lift the driving device off the probe assembly, loosen and remove extension drive adapter from the extension and Teflon tubing. Pass the tubing through another GVP extension with the coupling down. Remove ground clamp, and continue to drive and add extensions until sampling point(s) have been reached.

Prior to sample collection, it is necessary to expose tip and possibly remove the drive tip end, GVP extensions & extension drive adapter. Taking care to keep the tubing clean will allow it to pass unobstructed into the Extension Drive Adapter during the assembly & removal process. After removal, fill in around tubing with sand or native soils, followed by bentonite chips or powder to provide a permanent seal to protocol. Attach Flouropolymer Tubing to the sample collection system with a short piece of flexible tubing.

Application of a gentle vacuum to the proximal end of the Flouropolymer tube will draw soil gas through the selected Gas Vapor Tip, through the tubing, and eventually the pump.

Helpful Hints:
Suggested use of the tile probe in preparation of hole allows for the location of unknown obstructions, thereby eliminating potential damage of GVP Probe & speeding up the sampling process. Threads should always be cleaned after each use. Vegetable oil, used sparingly, can be used for thread lubrication. It is important to never contaminate any part(s) of the system that may come in contact with the sample. Always check to make sure that the power supply and cord are in proper working condition. Please refer to operator’s manual and instructional video prior to use of this product.

No reviews were found for AMS - Gas Vapor Probe Kits. Be the first to review!