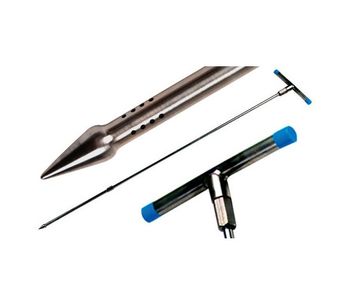 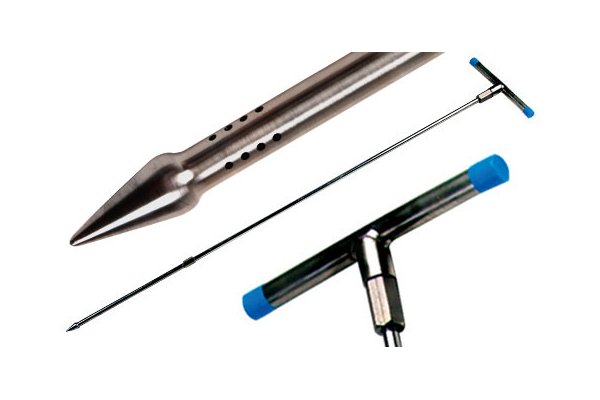 Easily and economically sample soil gas vapors at shallow depths for preliminary testing. The AMS 'original' gas vapor probe can take vapor samples in soils to depths of 12' depending on soil conditions. This kit is an excellent choice for shallow gas vapor sampling in soft soil. The kit includes a base section with a probe tip and soil gas access holes above. An included liner rod with tip is placed inside the base section. AMS also offers the patented dedicated gas vapor tip and the AMS Retract-A-Tip for soil gas sampling as well as shallow groundwater sampling.

The AMS Original Gas Vapor Probe was designed to extract vapor samples around underground fuel tanks or any container that holds a volatile liquid that could potentially contaminate the soil if a leak occurs.

The tip of the probe is constructed out of stainless steel and is heat treated and hardened. The tip is a rounded point that is formed to a diameter that is slightly larger than the drive extensions. The tip makes a 5/8” diameter hole and the extensions are ½” in diameter. Just above the formed part of the tip, there are a series of small holes. These milled holes in the tip serve as the vapor inlet holes.

The vapor probe tip is driven into the ground by one of two means; with the 10 pound slide hammer attachment or (if the soil allows), it can be pushed manually into the soil with a 10” cross handle.

Each GVP extension comes equipped with a 3/16” internal rod. The liner rod is also constructed of stainless steel. With the liner rod installed inside the extensions, the small coupling protects the vapor inlet holes from filling with dirt and plugging the inside of the extensions where the soil gas will eventually flow. After the probe has been inserted to the desired depth, the drive end and the internal liner rods are removed from the sampler. A vapor extraction fitting is installed on the probe.

The vapor extraction fitting includes a 3/16” barbed tubing adapter. A length of Teflon or plastic tubing can now be pushed onto the barbed adapter. The other end of the tubing can be attached to a vacuum pump or SUMA canister in order to extract the soil vapor sample.

No reviews were found for AMS - Original Gas Vapor Probe (GVP) Kit. Be the first to review!