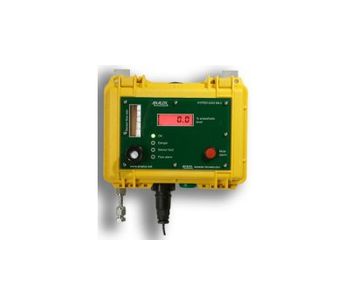 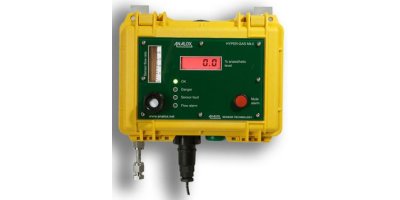 The Hyper-Gas MkII is a unique, hyperbaric hydrocarbon monitor for use in saturation diving.

The Hyper-Gas MkII is a hydrocarbon monitor comprising of a bell monitor which contains a sensor manifold. It is also designed to incoporate a topside repeater (sold seperately) which mimics the status of the bell monitor.

The unit is set to alarm at 10% of the amount of hydrocarbons required to cause anaesthesia.

Note: The Hyper-Gas MkII was not designed to monitor hyperbaric levels of H2S (hydrogen sulphide)

The unit was designed in 2006 in response to an incident in the North Sea where a diving bell was contaminated with hydrocarbons brought into the bell from the seabed by a diver.

Small quantities of hydrocarbons can set off gas in the bell atmosphere and act as an anaesthetic which could prove potentially fatal for divers if they are not made aware so that they can take evasive action.

The Hyper-Gas MkII is now mandated by The Association of Oil & Gas Producers (OGP) in their “411 Report” which means that any diving contractor working for an OGP member such as Shell, BP, Total or Chevron must have a Hyper-Gas MkII installed in their saturation diving system.

The unit is now used in the majority of operational diving bells and recognised as the accepted best industry practice.

The Hyper-Gas MkII bell monitor is located inside the diving bell so that the presence of hydrocarbons can be detected rapidly and the divers alerted quickly.

No reviews were found for Analox - Model Hyper-Gas MkII - Hydrocarbon Monitor for Commercial Diving. Be the first to review!