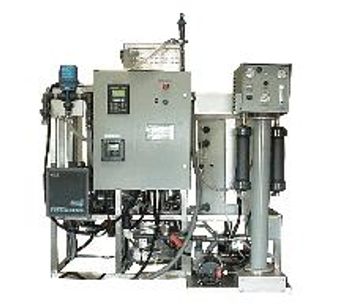 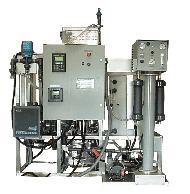 Full Automation, continuous onboard water quality monitoring, UV exposure designed for small continuous processing plants to polish out organic materials such as Arsenic and Cyanide. If the amount of organic material is fixed we can determine from testing of samples the exact amount of UV power required to eliminate these contaminants. AO3 and 4s provide high power in a small package.

The purpose of all Advanced Oxidation Technologies...

The purpose of all Advanced Oxidation Technologies (AOTs), is to produce hydroxyl radicals (-OH), a highly reactive oxidizing agent that reacts with and destroys most organic pollutants in water. There are a variety of advanced oxidation approaches commercially available. Each has a scope of wastewater treatment applications that it is best suited for. HF offers full-scale treatment systems employing different advanced oxidation processes. The two most important factors affecting flow rates are the level of contamination and the ease with which the target contaminant can be oxidized. There are several other factors that affect flow rates so in our experience the best way to determine possible project flow rates is to submit a sample to our lab for analysis. This empirical approach enables HF to deliver the most efficient recommendations for treatment applications, customizing solutions to specific client requirements.

How Does This Technology Work?

In the HF process, ultraviolet light (h) is used to dissociate hydrogen peroxide (H2O2) into two radicals. As an example, the UV oxidation of dichloromethane (a listed EPA Priority Organic Pollutant that is often present as a groundwater contaminant) could go through the following oxidation stages:

The net result of the above reactions is that the organic contaminant is completely mineralized, meaning that it is converted to either carbon dioxide gas or water and mineral salt; all innocuous constituents. This ability to completely destroy contaminants is a major advantage of advanced oxidation over competing processes. In the case of another HF process, ozone (O3) is activated by hydrogen peroxide (H2O2) generating hydroxyl radicals according to the following general equation:

Radicals produced in this way destroy organic compounds by the same chemical steps as in the UV/Peroxide case previously mentioned. In addition to the two AOTs described here, there are several other advanced oxidation technologies involving various combinations of ozone, UV light, peroxide, photo-catalysts, homogeneous catalysts and mechanical processes.

Economics of this technology are enhanced in several ways:

Our Reaction Chambers are designed with ease of maintenance in mind.  With our Quick Open chamber and Tri Clover fittings on all plumbing, maintenance is easy.

Our up-to-date Ozone Generation systems are self contained. This means you will not have to add any extra ventilation to your facility to remove excess heat created In typical Advanced Oxidation Systems. You'll have no worries about Ozone line separation due to this self-contained package.

With state-of-the-art control and real lime monitoring with these controllers, system navigation is a breeze and all information about system operations is fully viewable from the screen. Operation and alarm situations are easily identified and corrected.

With the PCS chamber dinning system, failure due to fouling is practical non-existent. The cleaning system operates on a timed cleaning cycle. This action Frees the contaminate from the chamber allowing it to flow free from the system.

Our Water Quality control system takes the guesswork out of working with your solutions. It will automatically discharge the treated product at the quality for your application.

HF has wastewater treatment experience with a wide...

HF has wastewater treatment experience with a wide array of organic (and many inorganic) contaminants found in industrial wastewater, municipal wastewater, contaminated groundwater, and landfill leachate.

Treatable Contaminants:
The hazardous substances that can be treated successfully by Advanced Oxidation, including its effectiveness are tabulated in the following table. HF Group chemists and engineers have the experience and the test equipment to design integrated cross technology solutions that included, Advanced Oxidation, Reverse Osmosis, Ultra and Micro Filtration, Ion Exchange, Vacuum Distillation, Chemical treatment and other technologies.

Complex wastewaters will often require more than one process for cost-effective treatment and HF is uniquely qualified to test and deliver integrated treatment systems. The most effective wastewater or groundwater treatment approach is selected through a comprehensive testing program to ensure the full-scale implementation will match laboratory results. HF has a complete lab with batch and continuous flow apparatus to test your water under realistic conditions (using bench scale and pilot scale testing) and develop the most economical process solution for your unique needs.

No reviews were found for Model AO3 & 4 - Medium Capacity Advanced Oxidation Systems. Be the first to review!