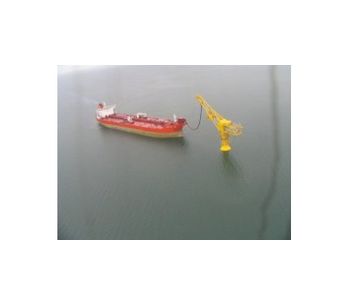 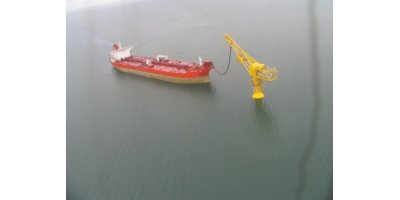 The offshore Liquefied Natural Gas (LNG) loading and/or offloading systems include technologies that enable the transfer of LNG from ship-to-ship or from ship-to-shore. LNG can be supplied from LNG carriers to re-gasification vessels or offloaded from floating LNG production vessels into LNG carriers. Typically the LNG transfer must be performed under all or at least most weather conditions at the offshore location.

Bluewater’s LNG loading and/or offloading systems are based on flexible composite hose technology that has been further developed and qualified in cooperation with Dunlop Marine. The qualification complies with European standard EN1474-2 for the design and testing of transfer hoses. The flexible LNG transfer hoses have an inner diameter of 16” and each section has a length of 40 metres maximum. The current hoses are suitable for aerial use only and are included in both tandem-based and tower-based offloading systems. The systems include one to three LNG hoses plus one vapour return hose. Per hose up to 5,000 m3 of LNG can be transferred every hour.

Tandem-based LNG transfer
The tandem offloading system is based on existing practices as successfully used in crude-oil tandem offloading systems. The hawser system that connects the shuttle tanker to the FLNG vessel is based on a taut-hawser operation which is also used in the offloading system of Bluewater’s FPSOs. The tandem LNG transfer system includes hose reels in the Stern Loading System (SLS) that are located sufficiently high to allow a catenary hose configuration to the Bow Loading System (BLS) at the bow of the dedicated LNG carrier. The tandem LNG transfer guarantees maximum transfer availability with optimised safety, reliability and operability. Typically, the separation distance between the two vessels during offloading is approximately 80 metres and allows connection at significant wave heights of up to 4.5 metres, while the loading operation can continue at significant wave heights of up to 5.5 metres.

Tower-based LNG transfer
The tower-based loading and/or offloading system includes a tower with a hose handling boom. The tower is located at the end of a pipe bridge that is connected to an on-shore LNG plant. The LNG carrier can moor close to the tower allowing allowing transfer of the LNG via the midship manifold.

No reviews were found for Bluewater - Offshore Liquefied Natural Gas Loading & Offloading Systems. Be the first to review!