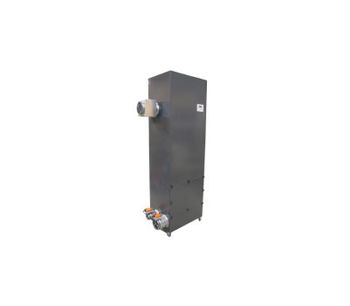 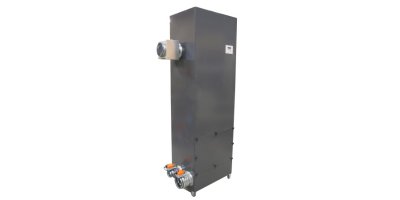 Carbon Dioxide (CO2) Air scrubbers may be used to maintain the high indoor air quality in premises in those cases when:

The contemporary method which is used in UF IND CO...

The contemporary method which is used in UF IND CO2 Scrubbers for removing excess carbon dioxide from the premises is the application of the special absorbent. When the absorptive capacity of the material is utilized, it is easily regenerated without losing its properties. The lower the concentration of carbon dioxide necessary to maintain in the premises, the greater the amount of absorbent is needed.

UF IND Carbon Dioxide (CO2) Air Scrubbers are working on a set program and do not require frequent servicing. Servicing includes the replacement of pre- and post-filters. Frequency of change depends on the quality of air flowing into them; as a rule for pre-filter it is 6-9 months, for post-filter- 12-24 months. Therefore, labor costs for servicing UF IND Carbon Dioxide Air Scrubbers are minimal.

Installation of CO2  Air Scrubbers help to reduce the concentration of carbon dioxide in the room to set values.

But if you really want to breathe the mountain air during high altitude training you should remember that in the mountains the air is clean and CO2 (carbon dioxide) level there is only 0,03%.

During sleeping in the high altitude chamber or te...

If environments containing high concentrations of carbon dioxide during high altitude training or sleeping it can lead to hypercapnia - a condition where there is too much CO2 in the blood.

Though hypoxic generators or air separation units are not able to support CO2 level low, to remove the build up of carbon dioxide being produced by metabolism during high altitude training or sleeping one should use CO2 scrubber.

For Shelters and Bunkers

It is worth to equip underground shelters and bunkers with carbon dioxide scrubber because during the first hours of a nuclear attack, smoke, carbon monoxide, and radiation particles could overcome the ventilation and filtration systems. Using proper portable carbon dioxide air scrubbers in underground shelters and bunkers or in the safe room people may stay without ventilation for several days.

In case of ground fires, the air blowers of ventilation should not be turned on to bring in fresh air. During this time, people in the shelters must breathe in a sealed shelter atmosphere.

Unventilated safe rooms or underground shelters and bunkers that are tightly sealed cannot be occupied for long periods without the risk of high carbon dioxide levels if they are not equipped with carbon dioxide scrubbers.

In case if you plan to accommodate more people than your underground shelter and bunker can accommodate, carbon dioxide scrubber is must to have.

The duration is shown below for different number of adults in the same sealed shelter.

No reviews were found for Carbon Dioxide (CO2) Air Scrubbers. Be the first to review!