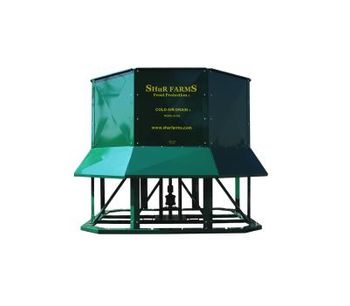 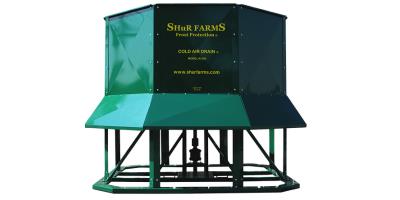 Base: All steel freestanding base, precision engin...

Lift Brackets: Integrated forklift/tractor brackets to provide complete portability for easy unloading and transporting in and out of the field.

Radiation frosts occur during clear, cold nights with no wind. The ground loses heat stored during the day allowing an inversion layer to develop. In an inversion, the warmer air layer sits above the cold air layer that is closest to the ground.

During a radiation frost night, the heaviest cold air molecules flow downhill, like water, due to gravity. This cold air settles in low elevation areas that do not allow for adequate drainage. As the cold air accumulates in an area, frost damage occurs.

The Cold Air Drain® thrusts the cold air upward to a height of nearly 300ft (91.44m). As the coldest air is being sent up, it collects and mixes with the warmer, lighter air from above.  This helps to give the cold air continuous lift and allows it to rise higher, until it is dispersed into the upper inversion layer. The coldest air layer is drained and will not fall back down.

Customized Systems!
For each project area, a Computerized Frost Analysis is offered, thereby eliminating much of the guesswork and overspending that often accompanies the purchase of frost protection.

Doesn't Cause Damage!
Unlike wind machines and sprinklers, the Cold Air Drain can be run all night without causing damage during a winter freeze or changing weather conditions.

Portable!
Integrated forklift/tractor brackets provide complete portability for easy unloading and transporting in and out of the field.

Low Operating Cost!
Shur Farms Cold Air Drain has the lowest operating costs of any active frost protection method. Most systems will have a 100% payback in the first year of operation.

No Maintenance Contracts!
The Cold Air Drain is easily owner-maintained.

Minimial Site Prep!
All Cold Air Drain units are built on a metal skid and are freestanding. No cement pad is needed.

COLD AIR 'LAKES,' FROST POCKETS, & ACCUMULATION AREAS:
Without having any drainage, the freezing air fills an area, similar to a bowl or lake.

SWALES & CANYONS:
A flow of freezing air is funneled into an area such as a swale or canyon causing a build-up of cold air.

FLOODING:
Flooding occurs when cold air accumulates below an orchard, builds up, and then overflows the contained area.

FLAT AREAS:
To drain cold air from flat areas, artificial or natural barriers surrounding the growing area may be necessary. These contain the cold air and allows for its removal with the Shur Farms Cold Air Drain®.

No reviews were found for Cold Air Drainage System. Be the first to review!