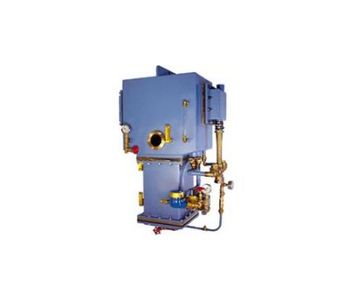 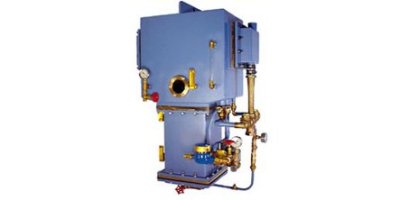 When seawater is boiled in a vacuum chamber, vapour can be produced at temperatures as low as 40°C. It is this principle of low temperature/low pressure distillation, which is applied in the evaporator for the production of fresh water from seawater. It utilizes a source of low-grade heat, mostly waste heat from diesel engines, to produce the vapour.

In the evaporator a controlled amount of seawater is supplied as feed water, to the bottom of the heat exchanger. Here the seawater is heated in a vacuum and evaporated. The remaining non-evaporated seawater is discharged continuously in order to control the brine density. The evaporator uses the rejected heat from the fresh water-cooling system of the ship's engines. This hot jacket water, which may reach a temperature between 75°C and 90°C, is passed outside the tubes of the heat exchanger.

Depending on the amount of cooling water, as it passes through, the temperature will drop between 3°C and 14°C, before returning to the ship's system.

The evaporators, marketed under the EWS banner, are compact, suitable for bulkhead or stand-alone installations. Combined with a UV sterilizer, the quality of the fresh drinking water produced, meets the high standards set by of the World Health Organisation (WHO).

The stainless steel EWS evaporators are standard provided with: