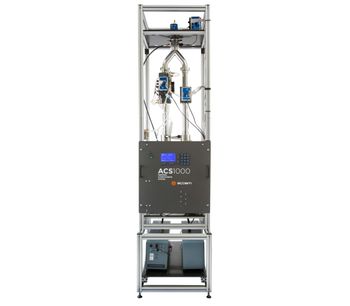 The ACS-1000 can be fitted with a wide variety of sample inlets including PM1 , PM2.5 or PM10. Ambient air is drawn through the sample inlet and down through an unrestricted ball valve into the various modules.

Humidity reduction is performed using a permeation dryer which utilises a permeable membrane and a source of dry air. The dryer uses a single nafion tube which allows H2 O vapour to transfer from the inside of the membrane, to the outside, removing it from the sample air. The large inside diameter (40 mm) of the membrane combined with the grounded mesh, minimises particle losses through the dryer.

Dry sample air passes through the inside of a Gore-Tex membrane while the outside of the membrane is filled with Milli-Q water. As the water temperature is controlled to a higher set point, the amount of water vapour transferred inside increases, allowing the relative humidity of the sample air to be directly controlled.

The modular design gives flexibility to the user allowing for multiple configurations. Figure 1 shows the sample being split into two paths by an isokinetic flow splitter. The dry sample passes directly into one instrument for measurement while the other sample is humidified to a predetermined RH set by the controller and then measured. Alternatively each path’s relative humidity can be stepped between 40 % to 90 % over a user defined interval. The ACS-1000 uses multiple temperature and relative humidity sensors located throughout the sample paths to continuously measure, control and record sample conditions. Additionally the system can be configured to run points and sequences manually or as a fully automated process. The microprocessor allows the operator to set key parameters for operation, such as:

The ACS-1000 is particularly useful when combined with a pair of Ecotech’s Aurora Nephelometers, due to its ability to directly communicate with them. However, it is designed to be used by many other types of aerosol instrumentation as well.

The ACS-1000 enables regular automatic zero and span checks, and calibrations to be performed on instrumentation. During calibrations the system automatically closes a ball valve to ensure air from the sample inlet is diverted directly to the exhaust pump which maintains a constant flow at the sample inlet. Performing a calibration will therefore not affect other instruments or create changes in flow.

No reviews were found for Ecotech - Model ACS1000 - Aerosol Conditioning System. Be the first to review!