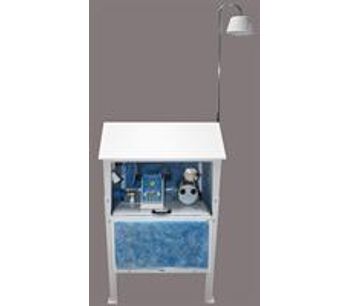 The Model GAS-22E Global Air Sampling System is a microprocessor controlled low-volume air sampler consisting of an oil-less, carbon vane vacuum pump, with a constant airflow regulator for use where a nearly constant airflow is desirable.  The regulator holds a constant pressure drop across an in-line orifice, by varying the flow through a bypass valve into the pump.  This system allows the pump to work at a minimum head drop at all times, permitting it to run cooler, thus extending its service life.  The oil-less pump requires no lubrication to maintain optimal efficiency during its service life.  The pump is mounted on a removable base plate, which can be secured within the GFCI protected aluminum environmental Weatherhouse, model WH-3 having an enclosure rating of IPX3.

The GAS-22E utilizes a bright VFD that has four (4) lines by 24 characters and utilizes wide temperature range electronic components for use in extreme ambient conditions.

The GAS-22E Global Air Sampling System is designed for continuous outdoor use. Please consult the product specifications for the design temperature range and the installation category.