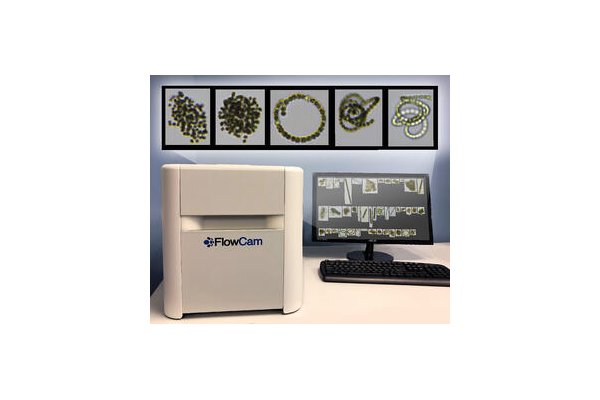 Based on proven FlowCam technology, the FlowCam Cyano automatically identifies cyanobacteria from other algae and particles in aquatic samples. Using a patent-pending combination of excitation wavelength, phycocyanin fluorescence measurement, and image recognition software, the system automates what was previously done using manual microscopy. After differentiating the cyanobacteria from the other algae in the sample, VisualSpreadsheet software can be used to further characterize specific types of algae found in the sample using 40+ physical parameters.

How does the FlowCam Cyano Work?

(Left): Relative fluorescence intensity wavelengths for photosynthetic pigments phycoerythrin, phycocyanin, and chlorophyll. The blue and green boxes on delineate the fluorescence range of phycocyanin (650±10 nm) and chlorophyll (700±10 nm), respectively, detected by the FlowCam Cyano. Image modified from French and Young, 1951.

A schematic diagram of the FlowCam Cyano is depicted to the left. The following describes the fluorescence of chlorophyll and phycocyanin from the point of excitation to its use in pigment analysis:

3.  VisualSpreadsheet® , the analysis software associated with the FlowCam, calculates the Channel 2/Channel 1 ratio for each imaged cell, a ratio calculated from relative fluorescence intensities received by PMT 2.