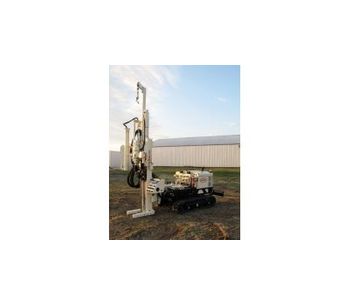 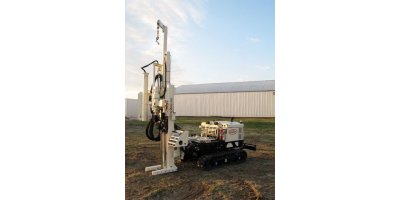 The Geoprobe Model 7822DT is a high-capacity direct push machine with a narrow platform for limited access areas and a sufficient stroke for added work space under the hammer. This machine is equipped with many of the features Geoprobe customers are accustomed to, and with many new advantages to offer customers flexibility in all types of field conditions.

Some of those features Geoprobe operators are sure to notice quickly include:

New mast and winch configuration.
This provides users better control and faster line speed, which, according to Lee Shaw, Geoprobe Customer Service and Number 1 fan of the machine, “it’s ‘Da Bomb!  It’s like lightning.  It has a much nicer valve controlling it.”  Lee is also a fan of the DT22 tooling system.  When he first tested the 7822DT, “I was able to sample with the DT22 to 200 feet in a couple hours in our Kansas clays.”

Oscillation.
Provides easy vertical positioning of the foot on unlevel terrain which, according to Victor, “is especially great for augering when you’re aligning the auger joints.  The operator has complete control over alignment.”

Auxiliary hydraulic power ports.
Three quick coupling hydraulic power ports allow for the use of multiple field accessories including Moyno pumps, hydraulic liner extruders, pressure washer modules, and many more.  What makes two of these auxiliary outlets even more useful is that they are proportionally controlled by the operator from the control panel, and the two have a flow capacity of up to 25 gpm.

Safety and Serviceability.
Finally, but arguably the most important aspects of the new Geoprobe Model 7822DT machine revolves around two big words: Safety and Serviceability.  Safety first.  This machine was designed and built CE compliant allowing machine owners to utilize the 7822DT on sites around the world regulated by the strictest safety protocol.  As for serviceability, building durable and field supportable machines has been a trademark of Geoprobe for over 20 years.  During the design phase of the 7822DT project, the Geoprobe engineering design team spent significant effort to streamline the service aspects users would encounter in hopes of eliminating or reducing a service interval whenever possible.  Along these lines, one of the most exciting service related improvements to the 7822DT is the GH64 Modular Percussion Power Cell Technology.  This feature allows for fast removal of the percussion hammer section of the GH64 hammer ... in less than 15 minutes!  Combined with the fact that this Modular Percussion Power Cell is small and compact, it can now be sent via standard overnight carriers for easy service and fast, efficient turn around ... with no special fees.

No reviews were found for Geoprobe - Model 7822DT - High-Capacity Direct Push Machine. Be the first to review!