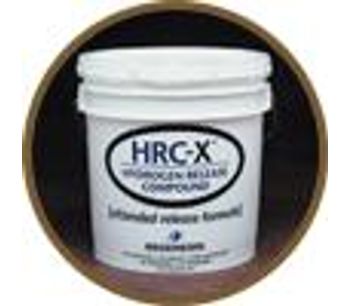 HRC-X is a controlled release, electron donor material, that when hydrated is specifically designed to produce an extended, controlled release of lactic acid. The newly available lactic acid is critical for the production of hydrogen to fuel anaerobic biodegradation processes in soil and groundwater. HRC-X contains more lactic acid than HRC and is a more viscous material.

To make available time release lactic acid for fermentation by subsurface microbes that in turn generates hydrogen. Hydrogen is the key ingredient in the anaerobic contaminant degrading process known as reductive dechlorination. Reductive dechlorination is the mechanism by which chlorinated compounds are biodegraded into less harmful constituents such as ethene and ethane. HRC-X is designed to release lactic acid longer than standard HRC thus producing reducing conditions over an extended period of time. This extended longevity is particularly effective in driving the desorption, dissolution and degradation of higher dissolved phase contaminant concentrations including residual DNAPL.

HRC-X is typically applied using direct-injection techniques. This pressurized injection process allows the product to placed into the zone of contamination and pushed out into the aquifer. Once in the subsurface, HRC-X will reside within the soil matrix fueling reductive dechlorination for up to 60 months through the extra-slow, controlled release of lactic acid.

Residual Dense Non-Aqueous Phase Liquids (DNAPL's) are often difficult to find and very costly to treat. Residual DNAPL can cause lingering and unwanted sources of groundwater pollution that can represent enormous and unexpected cleanup costs. HRC-X is a proven solution to this challenging problem. Once injected into the general vicinity of the residual DNAPL, HRC-X goes to work producing a long-term, controlled release of lactic acid resulting in hydrogen distribution throughout the area. This, in turn, drives the rapid desorption, dissolution, and degradation of the bound residual DNAPL.

Because HRC-X can be applied without the need to identify the exact location of the residual DNAPL and because it does not require capital equipment or operations and maintenance (O&M), HRC-X can significantly reduce the cost of cleanup by avoiding the excessive expenditures associated with unnecessary site analysis, construction and hardware, and long term O&M costs.

When long-term plume control is required to halt the migration of groundwater contaminants, HRC-X may be one of the most cost effective alternatives available. In the past, the only alternative in such situations was to cut-off the plume by intercepting the groundwater with very inefficient and costly pump and treat systems, or by disruptive construction of expensive sheet pile barriers and 'iron filing walls.'

Groundwater remediation professionals now have an effective alternative to offer their clients and to reduce their cost burden, HRC-X. When applied perpendicular to the migrating plume, HRC-X passively releases the hydrogen required to degrade the mobile contaminant flux. The HRC-X material, once installed, continues to release hydrogen, effectively cutting off the migrating plume for a period of up to 5 years while avoiding capital costs associated with the more engineering, construction and O&M intensive systems.

HRC-X is a special formulation of the patented and widely accepted Hydrogen Release Compound (HRC), which has been successfully applied on hundreds of project sites worldwide for the cost-effective, in-situ treatment of groundwater contamination.

HRC-X is a viscous material, composed of glycerol polylactate, which is injected directly into the contaminated subsurface. Once in place, this compound slowly releases lactic acid for periods in excess of 3 years. This source of lactic acid is then metabolized by naturally occurring microbes producing consistent, low-level concentrations of hydrogen. This hydrogen, in turn, is used by microbes to degrade chlorinated solvent-type contaminants through a well understood process known as reductive dechlorination.

HRC-X can be used to degrade a range of contaminants including: degreasing agents (PCE, TCE, TCA and their breakdown products), carbon tetrachloride, chloroform, perchlorate, nitrate, and certain pesticides/herbicides.

No reviews were found for HRC-X - Hydrogen Release Compound [eXtended]. Be the first to review!