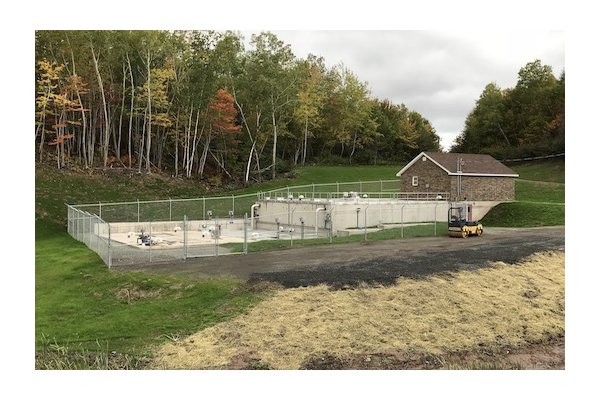 System Components: Influent continuously enters the anaerobic chamber where solids settle. Settleable BOD is converted to soluble BOD. BOD is reduced by 30% and solids are reduced by 60%. The influent then flows to the SAM™ reactor. Mixed liquor is maintained in the SAM™ reactor to suppress orders and initiate and accelerate carbon and nitrogen reduction.

Fill Phase: When the level in the SAM™ reactor reaches a predetermined “control level” the motive liquid pump is started. The SBR basin is filled and mixed. A percentage of the pumped flow is returned to the anaerobic chamber where biological solid settle. Settled solids in the anaerobic chamber are digested.

Interact Phase: When the level in the SBR reaches TWL, nitrified mixed liquor overflows the surge chamber weir and is returned to the SAM™ chamber to mix and react with the raw influent. Aeration is cycled on and off to provide the required oxygen. Denitrification is reliable and complete. Scum is also removed from the SBR basin.

Settle Phase: When the level in the SAM™ reactor again reaches “control level” aeration is discontinued and the SBR basin settles under perfect quiescent conditions.

Decant Phase: When the settle timer expires, the decant valve is open and treated effluent is withdrawn from the upper portion of the SBR basin by means of a fixed solids excluding decanter.

Filled Decant Phase: If, during peak flow events, the SAM™ reactor reaches TWL before the decant phase ends, influent flows in a reverse direction through the surge return line and overflows the surge chamber secondary weir and is diffused into the settled sludge at very low velocity as the decant phase continues.

In operation, all influent flow enters the anaerobic basin where influent solids are allowed to settle much like a primary clarifier. Elimination of primary solids in the anaerobic basin allows for much smaller SBR basins at equivalent SRT than conventional SBRs. The anaerobic selector also creates soluble carbon as a food source for biological nutrient removal through anaerobic conversion of settleable BOD to soluble BOD. The influent then flows to the SAM™ surge basin, or influent equalization basin. The surge basin provides flow and nutrient equalization to optimize treatment at the full range of flows and loadings.

Several unique feature of the Fluidyne ISAM™ SBR include odor control and scum skimming. Mixed liquor is maintained in the SAM™ tank to immediately react with incoming flow from the anaerobic chamber to suppress odors and initiate and accelerate carbon and nitrogen reactions. Mixed liquor is recycled from the top of the SBR tank effectively removing scum by use of proprietary flow and scum control system. In addition, nitrates are recycled to the SAM™ tank for effective and rapid denitrification. Denitrification reactions are accelerated in the presence of the unreacted carbon from the raw sewage entering the SAM™ tank. Aeration and energy requirements are reduced as nitrates are fully reduced to nitrogen gas in the SAM™ tank.

No reviews were found for Fluidyne - Model ISAM - Integrated Surge Anoxic Mix System. Be the first to review!