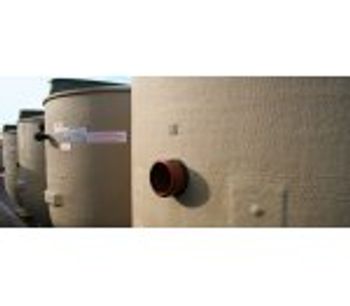 For domestic dwellings and small scale commercial premises without access to mains drainage, the Clearwater sewage treatment plant provides an economical and environmentally way of disposing of wastewater.

Specifically designed to receive all of the waste water from the serving property including kitchen, utility and bathrooms, the Clearwater sewage treatment plant treats the receiving effluent at source, and discharges a final effluent which is clear, odourless and suitable for discharge direct to a natural watercourse or underground soakaway.  Under normal domestic conditions the Clearwater system will produce a final effluent of 20mg/lt BOD, 30mg/lt S.S., 20mg/lt Ammonia.

In 2005, a new European Performance Standard was introduced.  EN-12566-3 requires manufacturers to submit their product to a testing facility that accurately measures the performance of treatment plants up to 50PE (population equivalent.

These tests identify how much pollution the treatment plant removes from the sewage, what level of maintenance is required, and what power is absorbed.

By holding EN-12566 certification, the Clearwater system is approved for an exemption from a permit to discharge under the new EPP2 environmental legislation.

The Clearwater system is a ‘single tank’ system using a Biological Filter Process.  Within the Clearwater system there are three treatment zones.  Within the primary zone coarse solids are filtered and retained for gradual breakdown, whilst the resulting liquid is continuously distributed over a plastic biological suspended filter by an integral airlift, powered by a remote air blower.  The biological filter is designed to promote the growth of aerobic micro-organisms which ‘treat’ the liquids.  Within the final settlement zone fine solids settle to the floor leaving the resulting liquids as the treated final effluent, which is discharged from the system.

As approved service provider for Clearwater products, MANTAIR provides a professional service for the distribution, installation, commissioning and maintenance of Clearwater systems.  This includes an initial site survey to discuss the requirements of the client and to obtain the information required to ensure a trouble free installation.

For further information and advice on selecting the appropriate Clearwater system, contact us on 01255 476467 or complete the form below.

No reviews were found for Mantair - Clear Water Sewage Treatment Plant. Be the first to review!