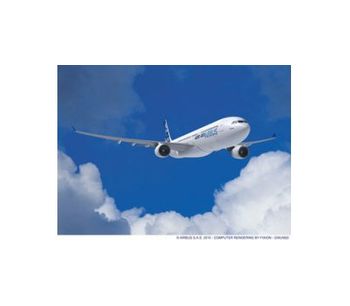 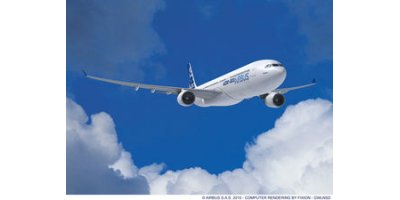 The A330-300 brings Airbus widebody efficiency to airline operations on longer-haul routes.

The stretched-fuselage A330-300 matches twin-engine efficiency with increased passenger capacity – all while retaining the A330 Family’s highly comfortable, low-noise cabin and operating commonality with the entire Airbus fly-by-wire product line. With Airbus’ increase in the jetliner’s maximum takeoff weight to 242 tonnes, the A330-300 offers a range of up to 6,100 nautical miles (11,300 km.) while carrying 300 passengers in a typical two-cabin arrangement, seating 36 in first or business class, and 264 in economy.

Its designed-in flexibility allows airlines to integrate Airbus’ innovative crew rest facilities without giving up revenue passenger seats. A secure flight crew location next to the cockpit accommodates one or two bunks, while a pallet-mounted rest area with up to seven bunks for cabin personnel is designed for loading under the main deck, with accessibility via a stair in the centre-left passenger cabin.

As a member of the popular A330 Family, the A330-300 benefits from demonstrated reliability, performance and unbeatable operating costs of the product line, in service to more than 400 destinations each week, with over 100 operators.

Many also profit from Airbus commonality: some 20 A330 customers utilise both A330-300s and the shorter-fuselage A330-200; while pilots with approximately 30 carriers practice mixed-fleet flying by using A330-300/200 jetliners along with four-engine A340s, or A330s alongside single-aisle A320 Family aircraft.

The A330-300 incorporates Airbus’ latest technology, which includes its digital fly-by-wire flight controls, a high-efficiency wing, and more than 10 tonnes of lightweight composite structures in its airframe. A lighter, brighter and more spacious cabin results from updated features that include smoother contours, new interior styling, state-of-the-art LED lighting and newly-designed air conditioning units. Also available is appealing mood lighting and a choice of overhead storage options with optimised bin designs.

Airbus’ 222-inch fuselage cross-section provides unmatched comfort on the main deck, while also offering large underfloor holds that open up opportunities for extra revenue from cargo. These holds accept industry-standard LD3 containers in side-by-loading, facilitating cargo processing and interlining. In a typical arrangement, six 96-inch pallets or 18 LD3 containers can be accommodated in forward zone; while its aft cargo hold can handle such loads as 12 LD3 containers along with one 96-inch pallet, plus bulk cargo.

Airbus invests 150 million euros annually in the A330 programme to deliver continuous innovation to this jetliner product line that result in lower costs and better operations for the A330-300.

These upgrades range from weight reductions in the airframe, introduction of modern passenger cabin features, and system improvements to engine upgrades and advanced navigation systems in the cockpit. They also result in longer maintenance check intervals.

A further enhancement of the A330 comes with Airbus’ launch of an increased maximum takeoff weight capability to 242 metric tonnes. With this improvement, the A330-300 will benefit from up to 500 nautical miles of extra range, to 6,100 nautical miles (11,300 km.) – with 300 passengers, and carry nearly five tonnes more payload than the previous 235-tonne aircraft. In operational terms, the increased takeoff weight A330-300 will be able to connect to the following new city pairs: London to Tokyo; Frankfurt to Cape Town; Beijing to Melbourne; Beijing to San Francisco; Kuala Lumpur to Paris; and Los Angeles to Dublin.

In addition, the 242-tonne version will serve as the development platform for the A330neo (new engine option). With the same fuselage length as the A330-300, the A330-900neo will incorporate new Rolls-Royce Trent 7000 engines and cabin upgrades, as well as aerodynamic enhancements – including A350 XWB-inspired winglets and an increased wingspan – to reduce fuel consumption per seat by a further 14 per cent compared to A330ceo (current engine option) aircraft.

As a further upgrade to the A330 Family, Airbus also announced the A330-300 Regional variant in 2013. This aircraft is optimised for domestic operations on routes with large populations and high traffic flows. The A330 Regional jetliner is tailored to seat up to around 400 passengers with Airbus’ standard 18-inch wide seat in economy, while offering significant cost savings through a reduced operational weight.

Caring for the environment, the A330 Family environmental footprint is better than the standards of today and tomorrow. With its low noise and emissions levels, A330s fly greener and quieter – supported by Airbus’ long-term commitment to further enhancing the eco-efficiency of its jetliner product line.

With the 242-metric-tonne increased maximum takeoff weight version, the A330 will bring increased fuel efficiency thanks to aerodynamic refinements and engine enhancements.