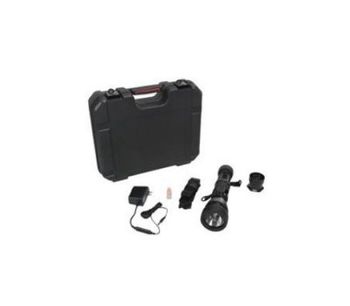 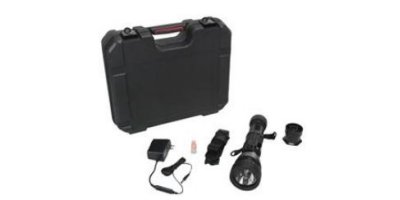 The Larson Electronics ATX-20-S Hazardous Location Approved flashlight has a Class 1 Division 1 Groups A-D approval and produces a brilliant light beam capable of reaching over 2,000 feet, making it ideal for inspection and work activities where long range is important.

This HID flashlight features a 90 minute run time on a single charge of its waterproof 2600mAh Lithium Ion battery pack. A single 20 watt short arc Xenide HID bulb powered by an internal ballast produces a 1200 lumen beam capable of reaching up to 2,500 feet. This flashlight is IP68 rated waterproof, making it capable of withstanding submersion under pressure without damage. The beam on this light is a 12° spot configuration and is not adjustable. The HID bulb in this unit provides high power and efficiency as well as a 6500k color temperature, producing a powerful beam that is a brilliant white-blue in color. The durable aluminum body has a black anodized coating to provide durable protection for this units' internal electronics and an aesthetically pleasing appearance.

This flashlight has a single push button switch that allows easy one handed operation, which combined with its rugged construction and powerful beam, makes it a competent all around flashlight capable of serving in industrial, commercial, tactical and private applications with equal effectiveness. This HID flashlight includes a hard carrying case, waterproof battery and separate battery charging stand, AC charger (US/International compatible), and Rubber lens/end cap protector.

Incandescent flashlights have a bulb with a filament, much like the common household light bulb. A consistent amount of current is fed to the bulb. The filament glows and light and heat are produced. The filament glows because it is a poor conductor of electricity. Eventually the filament breaks due to vibration or diminished capacity. HID flashlights have a globe of gas that contains bounded by electrodes. A spark jumps across the electrodes igniting the gas. Initially, the amount of current required to ignite the gas is higher. Once the gas is lit, much less current is required to keep the gas burning.

A device called a ballast controls the amount of current sent to the bulb. HID flashlights use about 50% less energy than incandescent bulbs, which means longer battery life than halogen incandescent bulbs. More importantly, HID lights have no filament to break. Thus, the HID bulb life is around 2500 hours, compared to several hundred hours of the filament based incandescent bulb. The HID bulb is more efficient, so it produces much more light with less energy over a long period of time. The trade off, however, is that the ballast that sends current to the bulb is an expensive addition, increasing the cost of the flashlight. The bulb itself is also significantly more expensive than halogen bulbs.)

No reviews were found for Model ATX-20-S - Explosion Proof Flashlight. Be the first to review!