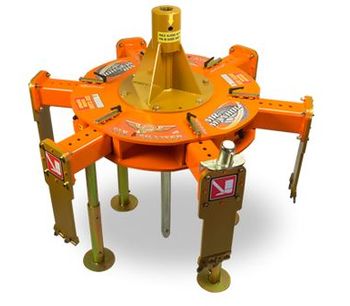 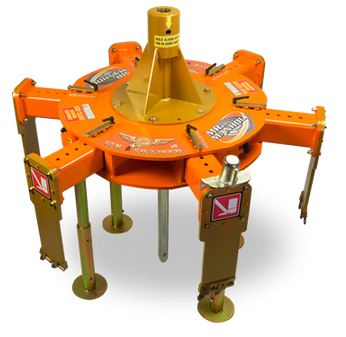 The Gold Series Six Shooter is the latest in manhole repair technology, with no other company in the world offering a similar tool. Uniquely designed to cut out manhole frames using a round cut instead of square, the Six Shooter makes manhole removal and repair smarter, faster, and safer for construction crews. With the Mr. Manhole system, your crew can cut out manhole frames and the surrounding road in about 10 minutes and finish the job in an hour. In comparison, it takes one to three days to repair a single manhole using the conventional way.

The heavy-duty Six Shooter is perfect for large contractors and municipalities.

Our Six Shooter was specifically crafted for high volume manhole repairs, with increased power, increased speed, and increased durability that makes it tough enough to get the job done. With the Mr. Manhole system, you can cut and pull out a manhole frame in as little as 10 minutes, reducing time spent in dangerous traffic and virtually eliminating manual labor and heavy lifting. Our system is the safest available to contractors and cities, with less injury to workers. You’ll get the job done safer and quicker, so you can move onto the next manhole.

As the name implies, the Six Shooter has six arms and six cutting blades that are each armed with four teeth, easily cutting through concrete and asphalt. Once the teeth have worn out, they are easily changed, right there on the job site. Simply replace them in seconds and get back to the job.

Adjusts to any size manhole

The Six Shooter features an adjustable cutting diameter from 44″ to 60″ standard and down to 28″ & up to 72″ with optional add on’s or underslung arm extenders. Easily adjusted in seconds on the job site without extra tools. The blades have a cutting depth of 14” (20″ with Extended Blades). Do you cut out more than just manholes? The underslung adapters are also able to cut water valve boxes out as well.

Weighing in at 1,200 lbs, the Six Shooter will take the work out of manhole repair. Even if it experiences resistance, the weight of the machine will carry it through smoother compared with lighter machines. And, working much like a hammer drill, the Six Shooter also bounces up and down, which increases its cutting ability even more.

A Speedplate is used to center the Gold Series Six Shooter within the manhole frame. There are a variety of manhole frames in use around the world, so we manufacture three different speedplates to ensure you have the correct Speedplate for your manhole frames.

Used for most applications, a Standard Speedplate will fit a lid seat diameter of 17” to 25.5”. This ships with the Gold Series basic kit.

The XL Speedplate is used for larger applications, such as utility manhole frames and will fit lid seat diameters from 23” to 43.5”.

The special speedplate is used with Smooth Walled manhole frames, which are popular in places like California. It fits lid seat diameters from 21.5″ to 27″.

No reviews were found for Mr-Manhole - Model Gold Series Six - Shooter. Be the first to review!