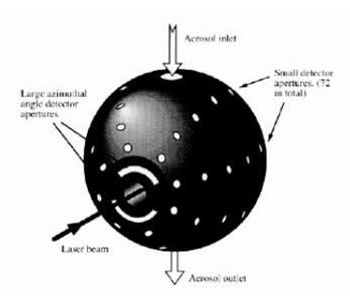 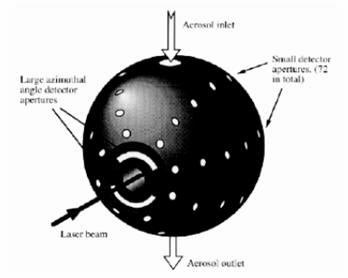 The detection of airborne bioweapons-type materials is based on a technique referred to as “Multiangle light scattering” or MALS.  Similar techniques are commonly used in both science and technology for elucidating structure.  Examples include x-ray crystallography and electron or neutron scattering to determine structure at the atomic and molecular scales, multi-angle laser scattering at the macromolecular and sub-micron scales, and microwave (radar) scattering at the macroscopic scale. These can also help determine the material composition of the target through measuring the refractive index (e.g., differentiating water from other materials).

Dr. Wyatt was the first to propose the use of scattered light as a means for identifying and characterizing microorganisms in his theoretical paper of 1968 [P.J. Wyatt, Applied Optics710(1968)]. Together with coworkers, he subsequently proceeded to explore, at the behest of the Department of Defense, the concept of identifying airborne bacteria and spores in real time using multi-angle light scattering methods [P.J. Wyatt and V.R. Stull, Project 1W662711A096 USAMR&D Command, Feb. 1972], constructing the first laser-based device for this purpose. The early prototype measured high-resolution polar angle scattering patterns, experimentally confirming theoretical predictions of these patterns and demonstrating the potential for discriminating bacteria and spore strains via MALS. Later studies [G.M. Quist and P.J. Wyatt, J. Opt. Soc. Am. A2, 1979 (1985); Y.L. Panet al.,Appl. Phys. Lett.28, 589 (2003); P.J. Wyatt and C. Jackson, Limnology and Oceanography3496(1989)] provided further confirmation of the capabilities of MALS, examining scattering patterns due to characteristic internal structuresof such individual bioaerosol particles in a natural airborne state, as well as studying background aerosols.

Data reduction of MALS signals to a few characteristic Optical Observables (OO’s) was proposed in a 1985 paper which demonstrated a quasi-empirical approach to robustly determine the structure and identity of particles. Some years later, under the aegis of the newly formed Wyatt Technology Corporation, MALS instrumentation was developed for the U. S. Army to make such measurements in real time, sampling single particles in an aerosol stream at rates up to 1000 particles per second. The DAWN-A shown in Fig. 1 comprised a spherical scattering chamber holding up to 36 fiber-coupled photomultiplier detectors subtending discrete collection angle positions on the chamber surface, defined in terms of the polar angles theta (θ) and phi (φ). In conjunction with these is a fine laser beam passing through the center of the chamber and intersecting the aerosol stream. Two of these systems saw over 10 years of continuous use by the Army and the University of Minnesota demonstrating different applications of MALS for aerosol characterization and classification.

In MALS, the variation of scattered intensity and polarization with angle depends critically upon the size, shape, material, orientation, and internal structure of the particle. Various studies, such as the ones referenced previously, have shown how MALS data may be used to differentiate spores, bacteria, toxin droplets and fine particulate matter. Examples are shown in Fig. 2 where the scattered light intensity patterns fromsingleaerosol particles of approximately the same size and shape are compared, with the patterns in the planeφ= 0.

Despite the similarity of these bioaerosols, the scattering pattern from a bacterialB. sphaericusspore is distinct from that of a bacterialS. epidermidiscell, and both of these quite different from those of other droplets and fine particles. These patterns were reduced to a simple set of OO’s describing the key pattern characteristics. The measured OO’s were sufficient to clearly differentiate the aerosols with high purity. Knowledge of these absolute and relative intensities in the form of robust OO’s permits the scattering particle to be correlated with a unique class, such as a bacterial spore or virus-laden droplet. Even if a spore were disguised with a thin coating of aluminum, for example, certain combinations of the recorded MALS patterns could still be used to determine the OO that classifies it.  The extraction of these optical observable descriptors for summarizing the distinguishing features of the MALS patterns is a key and proprietary element of the W-LImmediate Warning System.

In one of the later studies, MALS was shown to discriminate between species of phytoplanktonin vitroat a confidence level >99% by comparing measurements of OO’s that describe the ratios of optical scattering amplitudes and depolarizations at specific angular positions.

The central component of this detection technology is the scattering chamber itself, which allows particles to be examined one-at-a-time as they are constrained to pass through one or more fine laser beams.  An integrated aerosol handling system guides the particles through the laser beam by means of a sheath flow of particle-free air. Prior to being drawn into the chamber, the handling system preconditions the aerosols by removing both large (> 3μm) and small (

The MALS instrumentation, incorporated into the detector units, uses off-the-shelf components such as diode lasers, microprocessors, and photo-detectors. Diode lasers are now extremely inexpensive as their use with such commodity devices such as DVD and CD players has resulted in high volume production and rapidly falling prices. The extremely complex analyses required as each particle is measured are now easily performed at great speed using readily available single board microprocessors of the advanced design such as produced by Intel and AMD. Modestly priced single board high speed telecommunications sets are also readily available. The on-board data-processing requirements are relatively low since the optical observables of any single particle would be comprised of approximately 20 values. This reduces both processing and bandwidth requirements with consequent cost savings. It also allows for the processing of up to 50,000 particles per minute or more. Note, however, that biological threat particles would be expected to arrive at the DS at very low concentrations, perhaps resulting in only a few detections per hour.

A distributed system involves two separate elements:  detector stations (DS’s) and a central station (CS).  Each detector station includes an aerosol handling module, a microprocessor controlled data acquisition and processing board, light scattering chamber with detectors and laser, possible fluorescence detection chamber with UV light source, sample collection electrostatic deflector, and an integrated wireless transceiver able to send and receive both raw and processed data. There are many appropriate manufacturers of much of this equipment. The CS is comprised primarily of a large high speed microprocessor and an associated telemetry link able to communicate with each of its associated DS units as well as to analyze the data sent to it from each such DS in its network.  Depending on the number of units comprising a fully deployed system (for example, a shopping mal may have as many as a few hundred DS units and a dozen distinct CS units), processed data may be transmitted for alarm and warning purposes to a command and control center at the customer’s facility or to off-site locations.

A DS contains the following components:

On rare occasions, a single DS may be appropriate to monitor a local region (e. g.in the cabin of a passenger plane), although in most cases, multiple DS units will be distributed throughout each protected facility. In these cases, the programmed CS will process the collective data from each of the multiple detection stations to combine, quantify and refine further all such information collected in real-time to predict the severity of the attack and its spatial migration. By monitoring the data collected by the multiple DS units, confidence can be increased by the appearance of unusual and similar respirable particles at multiple detectors, which might typically occur with some temporal lag. With the known location of each DS, and the local detection variations being continuously transmitted, it should be possible to predict where the threat agents may next appear and at what concentrations. This predictive capability will be extremely helpful in orchestrating appropriate responses throughout large facilities.

The decisions involving when and how to issue an alarm will vary by institution.  The CS itself can be triggered to set off an alarm, or it can be designed to alert those in charge of “alarm conditions”, who will make the decision to issue an alarm.  The size of the protected facility and its location are two factors that are taken into consideration when installing and configuring anImmediate Warning Systemfor each venue and determining exactly the type of alarm that should be issued to those at risk.

No reviews were found for Multi-Angle Light Scattering System. Be the first to review!