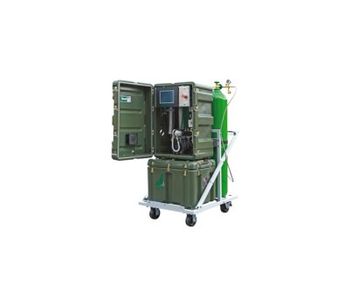 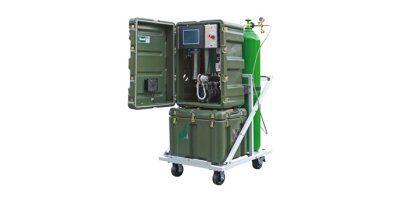 The Model CFP-15M combines the high pressure and variable flow rate available from an oxygen cylinder with the oxygen generation and replenishment of an oxygen concentrator. Empty oxygen cylinders become a thing of the past. By simply connecting an empty oxygen cylinder(s) (up to two H-size at once) to its discharge line and turning it on, it will automatically re-fill them to 2200 psi.

The Model CFP-15M turns itself off once the desire...

The Model CFP-15M turns itself off once the desired level of pressure is reached. It will top off most cylinders in a few hours, providing independence from traditional oxygen supply channels.

These mobile oxygen generation systems have the added benefit of being easily transported to battlefield hospitals. Unlike other portable systems, the Model CFP-15M can be assembled onto its own cart for mobility inside a hospital tent. This feature saves space, and eliminates the tripping hazard of other portable systems for (2) K-size cylinders, and a station for transfilling to smaller oxygen cylinders. Field assembly and set-up of the Model CFP-15M can be done in minutes.

The Oxygen produced by this system will be of Medical Grade, conforming to the United States Pharmacopeia Standard for ‘Oxygen 93 Percent’. There is an oxygen purity monitor which operates continuously. Air and oxygen pressure is also monitored.

A password secured touch-screen monitor provides easy access to all system controls and readouts. The system is designed to run automatically and requires little attention once it is started. It has an automatic shutdown feature if oxygen purity drops, with display and audible alarms. The CFP-15M incorporates pressure swing adsorption (PSA) technology for oxygen generation. PSA oxygen generators have been used in many critical applications for years. The design is modular, enabling quick and easy service. Should it be necessary, any of the major subsystems can be changed within minutes.

*A standard cubic foot is a cubic foot of gas at 14.7 psia (sea level atmospheric pressure) and 60 Degrees Farenheight

No reviews were found for OGSI - Model CFP-15M - Oxygen Generator Cylinder Filling Plant (Military). Be the first to review!