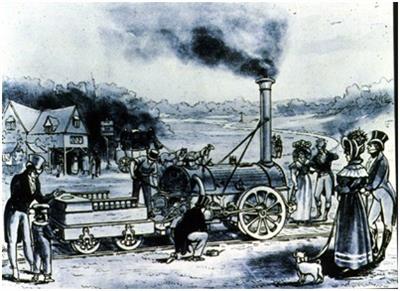 The industrial revolution can be only attributed to genius of the small part of inventors. It is undoubted that genius matters but the most important is that many favorable forces were combined in the late 18th century. Apart from being stimulated by the strong needs, inventors seldom made inventions. A great many of principles, as the basis of various new inventions, had been known for centuries prior to the industrial revolution; but due to shortage of stimulation, they were not applied to the industry. So is the case of steam power. Steam power was known by people in Ancient Egypt in the Hellenistic Age and even had been applied but it was only used for opening and closing the door of the temple. However, in England, in order to pump water from the mine and rotate the wheel of the new machine, a new power was urgently needed so a series of inventions and reforms happened. Finally, the steam engine suitable for batch production was developed.

Those favorable conditions lead to occurrence of a series of inventions so as to make cotton textile industry realize complete mechanization by 1830. Among those new inventions, the water-power machine invented by Richard Arkwright (1796), spinning jenny invented by James Hargreaves (1770), and spinning mule invented by Samuel Crompton (1779) are extremely outstanding. The water-power machine can spin the fine but solid yarns in rollers. Through the Spinning Jenny, one person can spin 8 yarns at the same time, later 16 yarns and finally 100 yarns. The spinning mule is also called the “mule”. Considering that the spinning mule has combined advantages of the water-power machine and Spinning Jenny, all new spinning machines can fast produce the yarns far more than those made by weavers. One priest, named Edmund Cartwright, tried to correct such unbalance. He gained the patent right of the power loom driven by the horse in 1785 and then driven by steam in 1789, but his invention was rough and had no commercial benefits. However, through 20 years of improvement, its most serious disadvantages had been corrected. By 1820s, such power loom had basically replaced the weavers by hand in the cotton textile industry.

Just as the inventions on spinning can lead to the relevant weaving inventions, inventions in some industry can promote the relevant inventions in other industry. The new cotton spinning machine gives rise to the need on the power which should be more sufficient and reliable than that driven by the water wheel and horse. Around 1702, the original steam engine was made by Thomas · Newcomen and had been widely used in water pumping from the coal mine. However, compared with other power provided, it consumes more fuels so it was only applied to the coal field. In 1763, James · Watt, the technician of University of Glasgow, improved the steam engine invented by Newcomen and Watt had reached partnership with Matthew · Boulton, a manufacturer. Boulton was responsible for raising money for the extremely expensive experiments and initial models. It is proven that this undertaking is extremely successful. By 1800, when the basic patent right of Watt expired, there were about 500 Boulton-Watt steam engines in use, in which 38% steam engines were used for water pumping and the remaining were used for providing rotary power for the spinning mill, blooming furnace, flour mill and other industry. However, smooth invention of the steam engine can not be separated from the natural environment and social factors at that time. As early as 120 BC, in Ancient Egypt, someone had studied to use steam as power. According to statistics, in the next over 1,800 years, more than twenty inventors had tried to use steam as power, but they had not made the relatively perfect steam engines which can be widely used in production. Therefore, it was said that “if Watt was born one hundred years in advance, he and his invention would die”. It can be seen that environment is also very significant.

The milestone of the steam engine can never be overestimated because it provides method to control and use heat energy and supply impetus to machinery. Therefore, it ends human being’s long-term dependence on the animal power, wind power and water power. At this time, the huge new energy has been gained by human beings and soon human beings were able to develop other mineral fuels hidden on the earth: oil and gas. Thus, the trend began and such situation occurred: people in Western Europe and North America can gain energy respectively 11.5 times and 29 times than those in Asia. Such figure has obvious meaning in such world with the economic power and military power directly depending on energy gained. In fact, it can be said that in the 19th century, Europe’s domination on the world was based on more steam engine than any other means or power.

The new cotton spinning machine and steam engine need more supply of iron, steel and coal and such need can be met through a series of improvement on mining and metallurgy. Originally, iron ore is smelt in the small smelter padded with charcoal. The forest loss makes the manufacturer have to seek for the coal. At this time in 1709, Abraham Darby discovered that the coal can change to the coke just as the wood can become charcoal. The coke is proven to be as effective as the charcoal, but the former is far cheaper than the latter. The son of Darby developed the large air bellow driven by the water wheel so as to make the first blast furnace mechanically operated to greatly reduce costs of iron. In 1760, John Smeaton improved it and he got rid of the air bellow used by Darby which is made of the leather and wood and replaced it with a pump which consists of four metal cylinders equipped with the piston and valve and is driven by the water wheel. The more important is improvement made by Henry · Cott who has invented the “puddling” method to remove impurity in molten pig iron in 1784. He placed the molten pig iron in the reverberatory furnace and then stirred or “puddled' it. By this way, through oxygen in circulating air in the molten mass, the carbon can be removed from the molten mass and after carbon and other impurities are removed, the iron will be produced which has more toughness than the original fragile molten pig iron or pig iron. At that time, in order to keep pace with the increasing needs in the iron making industry, coal mining technology has also been improved. It is the most important that the steam engine adopts the mine to drain water. Additionally, in 1815, Humphry · Davy invented the safety lamp which has greatly reduced danger in mine exploration.

Development of textile industry, mining industry and metallurgical industry stimulates needs on the improved transportation facilities which can be used for shipping bulk coals and minerals. In 1761, the most important step happened: at that year, Duke of Bridgewater built the 7-mile canal linking the coal mines between Manchester and Wolseley so the coal price in Manchester fallen by half. Later, the Duke extended this canal to River Mersey and costs on it were only one-sixth of the price gained by the land carriers. The amazing results gave rise to canal development fever, which made England have 2500-mile canal in 1830.

The great Road Building Age occurred simultaneously with the Canal Age. Originally, the roads were very primitive and people can travel only on foot or riding a horse. During the rainy season, the wagon carrying goods can not be driven by the horse on such road. After 1850, a group of road building engineers: John · Metcalf, Thomas · Telford and John · McAdam, invented the technology to build and pave the hard surfacing which can stand transportation throughout the world. The speed of the wagon increased to 6 miles, 8 miles and even 10 miles per hour from 4 miles per hour and travelling at night became possible. Hence, travelling time from Edinburgh to London, reduced to present 44 hours from previous 14 days.

Since 1830, the road and waterway were challenged by the railway which was realized by two stages. In the first stage, it was the steel rail or iron rail which had been widely used in the middle of the 18th century and such rail was often used for shipping the coal from the mining opening to some waterway or coal firing place. It was said that on the rail, one woman or child can pull the goods van carrying 0.75 ton and one horse can carry the goods equal to those that 22 horses carry on the common road. In the second stage, the steam engine was installed on the goods van. The mining engineer, George Stephenson, made great contribution in this stage and he made use of one locomotive to pull several coal cars to River Tyne from the mining. In 1830, his locomotive “rocket” travelled 31 miles at the speed of 14 miles per hour and pulled one train to Manchester from Liverpool. Only in a few years, the railway controlled the long distance transportation and can carry passengers and goods at the faster speed and lower cost than the road or waterway. By 1838, England had already held 500 miles of railway, by 1850, 6,600 miles and by 1870, up to 15,500 miles.

Steam also applies to water transport. Since 1770, inventors from Scotland, France and America began to test the steam engine on the ship. The first commercial steamship was successfully built by Robert · Fulton, an American people. He went to England to learn painting but after knowing James · Watt, he began to study engineering. In 1807, his “Clermont' steamship sailed on the Hudson River and this steamship was equipped with one Watt steam engine driven by the paddle wheel. It sailed 150 miles from Hudson River to Albany. Other inventors also took Fulton as the example and the most famous was Henry · Bell in Glasgow and he laid foundation for the shipbuilding industry in Scotland at the both sides of River Clyde. In the early stage, the steamship was only used to sail on the river and sea. However, in 1833, the “Royal William” steamship sailed to England from Nova Scotia. Five years later, the “Sirius” and “Great Western” steamships sailed across the Atlantic Ocean at the opposite direction, respectively taking 16 and half a days and 13 and half a days with their travelling time about half of time required by the fastest sailing ship. In 1840, Samuel · Cunard built one fixed shipping line across the Atlantic Ocean and announced the arriving date and departure date of the ship in advance. Cunard advocated that his shipping line had replaced the irregular “ocean railway” which can not be separated with the sailing ship but make people irritating. By 1850, the steamship had surpassed the sailing ship in terms of carrying passengers and parcel posts, successfully winning freight transport.

No reviews were found for Origin - Steam Technology. Be the first to review!