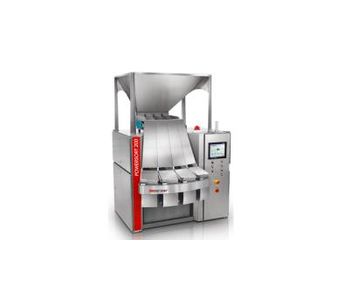 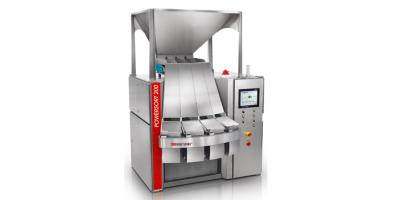 A sorting system based on laser spectroscopy which separates previously inseparable plastics with highest precision and speed, allowing the long-term recovery of valuable raw materials.

Plastic is everywhere nowadays, as PET bottles, as the housing for electronic and other equipment, inside cars, as food packaging and in many other areas. It is made from valuable raw materials such as oil or natural gas. One kilogram of polyethylene terephthalate (PET) requires around 1.9 kilograms of crude oil and a vast amount of energy, for instance. However resources are finite, and what could be more obvious than to recycle plastics responsibly? This will not only ensure the efficient use of resources, but will also help avoid giant landfill mountains.

The clean sorting of individual materials is a problem, however, since mixed plastic recycling streams not only contain valuable materials, but frequently also foreign plastics, plastics containing chlorine or heavy metal compounds as well as contaminants and additives. Using visual, camera-based or other conventional methods, many of the unwanted foreign substances found in recycling cannot be identified, or can only be identified with difficulty, since they are frequently impossible to distinguish either by virtue of their color or by other common parameters. Small particle sizes often also present a problem for conventional sorting systems. If the proportion of foreign material in the recycled material remains too high, it is classed as being of lesser value and its opportunities for reuse are limited.

POWERSORT 200 steps in where visual or other established systems and detection methods fail. The system uses a highly efficient and accurate detection method based on high-speed laser spectroscopy: it identifies the good material in a plastic flake or granulate stream using its specific opto-electronic spectrum and sorts it from various foreign and contaminating materials in just a single process step.

The system was originally developed following a suggestion by a major drinks manufacturer who wanted to put all of the PET disposable bottles it sold in a closed recycling loop and avoid mountains of landfill. PET recycling in food-grade quality, for example in the context of bottle-to-bottle recycling - with POWERSORT 200, this is already possible.

The powerful, efficient system is also highly skilled in other areas of plastics recycling. The previously unresolved sorting of dark or black plastic mixtures, of the type found on the inside of every car for example, is now possible.

The challenge of WEEE (Waste of Electrical and Electronic Equipment)

One major challenge for the immediate future is the recycling of shredded plastic waste from electrical and electronic equipment, such as the casings of computers, TVs or household appliances. In Germany alone, several 100,000 tonnes of plastic waste are produced from the recycling of old electronic equipment. Until now, the majority of this plastic waste has only been thermally disposed or exported to Asia. To produce value-oriented recycling, the various types of polymer need to be identified and sorted. It is also essential to separate old plastics that contain harmful substances, such as those that contain flame retardants, which cannot be used anymore. Sorting using laser spectroscopy means that electronic scrap will in future be able to be reused in new electronic equipment. So waste can now become a resource.

Precise sorting with a physical 'fingerprint'

POWERSORT 200 identifies different plastics using their characteristic spectrum, which corresponds to a physical fingerprint. The system uses a special laser spectroscopy method and evaluates the material streams using spectral analysis. The broad and highly differentiated spectrum permits the precise identification of materials and therefore an accurate distinction between good and foreign substances. In principle, numerous material streams can be detected and sorted in this manner.

Powersort 200 uses high-speed laser spectroscopy and achieves a sorting capacity of 2.4 to 3 tons per hour, depending on the density of the material. Thanks to the multi-spectral, bright optical configuration and extremely fast signal processing speed with powerful signal processors, up to a million spectra are generated and evaluated per second. At this high resolution, even tiny particles of up to one square millimeter can be analyzed and sorted.

If a particle is identified in the stream as foreign material, a variety of supersonic air jets ensure it is removed from the good material stream. The path between the measuring field and the ejection mechanism is extremely short and, together with the ability to configure detection thresholds and the blower unit with material-specific settings, leads to an extremely low false reject rate. With Powersort 200, a rejection rate of over 98% is possible, depending on the material used, with minimal loss of good material.

Recycled plastic contaminated with foreign substances can cause significant problems and quality issues when it is reprocessed. In the domain of PET recycling, for example, typical materials that are very difficult to distinguish visually from good PET include PVC, nylon, silicone, PET with TiO2, PLA, PC, glue / salt or paper and flakes containing barrier substances (such as scavengers, blends or multi-layers). They do however lead to lower transparency and discoloration. Cracks or inclusions can further reduce quality during subsequent processing, such as in the manufacture of new PET drinks bottles.

Powersort 200 detects the foreign substances, separates them from the good material stream and ensures that the recycled material is of high quality - even up to food-grade standards. Conventional detection systems fail in this task, since transparent PET and PET contaminated with PVC, nylon or other substances is very difficult if not impossible to distinguish visually from pure PET, especially when in granulate form. It is only during the later processing stage, and in particular under the influence of high temperatures, that these foreign substances become visible as a result of discolorations in the final product. Brown wood and glue residue is hard to detect in brown PET, for example. With Powersort 200, the different materials can be clearly detected and rejected by virtue of their specific spectrum or physical fingerprint.

The detection and sorting system is based on high-speed laser spectroscopy and can master even the most difficult sorting tasks.
High resolution:

POWERSORT 200, with up to 1 million spectra per second, achieves a 10 times higher resolution than conventional systems, allowing the detection and sorting system to detect even the tiniest particle sizes of up to one square millimeter.

POWERSORT 200 evaluates the entire spectrum, from ultraviolet through visible light to the near-infrared range.

With POWERSORT 200, a rejection rate of over 98% is possible, depending on the extraneous material in question, with minimal loss of good material.

POWERSORT 200 delivers an end product that impresses with high sorting purity, even for colored and black materials.

The recycled plastic is of high quality and is ideal for 100 % reuse in the food sector.

High degree of readiness for the future:

Thanks to positive detection, a broad spectrum of contamination, including many new materials such as PLA, can be detected and sorted.

The system can be used for quality assurance and process monitoring in any recycling process.

The UNISENSOR team was nominated with its high-speed laser spectroscopy-based POWERSORT 200 plastics sorting system for the German Federal President’s Award for Technology and Innovation (Deutscher Zukunftspreis) in 2010.

No reviews were found for Powersort - Model 200 - Laser Spectroscopy Sorting System. Be the first to review!