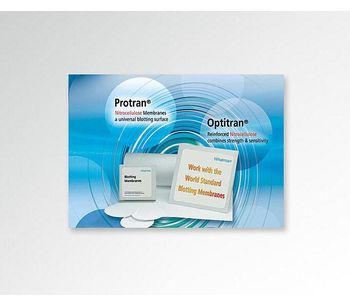 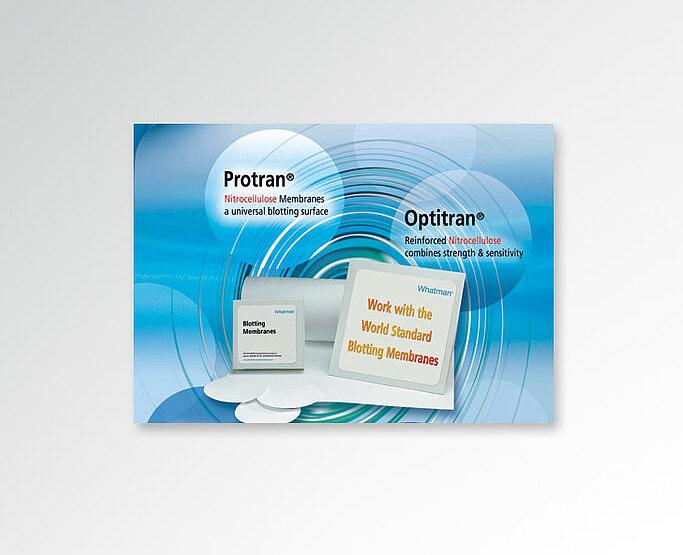 Protran® nitrocellulose membranes are the most frequently specified transfer media in the world for Western, Southern and Northern blotting. Additional the membrane is excellent for carbohydrate studies (Glycomics).

Protran® membranes have the best handling strength of all pure nitrocellulose membranes. They are compatible with a variety of detection methods, including isotopic, chemiluminescent (peroxidase/ luminol-based), colorimetric and fluorescent. Unlike PVDF membranes, Protran nitrocellulose requires no methanol pre-wetting step. This makes it the membrane of choice for proteins which prefer aqueous environments. Prior to transfer, the membrane is simply wet in water, and then in the transfer buffer. No other pre-treatment steps are necessary.

In addition to the high binding capacity, Protran nitrocellulose membranes inherently have very low background. The superior surface properties of the membrane guarantee superior signaltonoise ratios, without the need for stringent washing conditions.

A particular benefit of the proprietary Protran nitrocellulose formula is the proven excellent shelf life of proteins. Empirical evidence shows that proteins maintain molecular recognition activity for five years on Protran, which makes it the standard for protein blotting.

The Protran supported membrane consists of pure 100 % nitrocellulose cast onto both sides of an inert polyester support material. The support in no way affects transfer conditions or results and gives the membrane exceptional handling characteristics, allowing it to be reprobed repeatedly.

No reviews were found for Protran Blotting Membranes. Be the first to review!