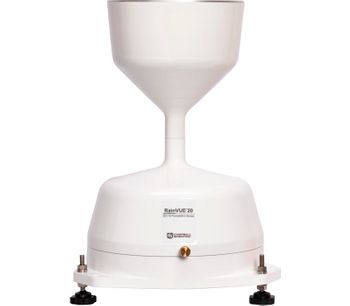 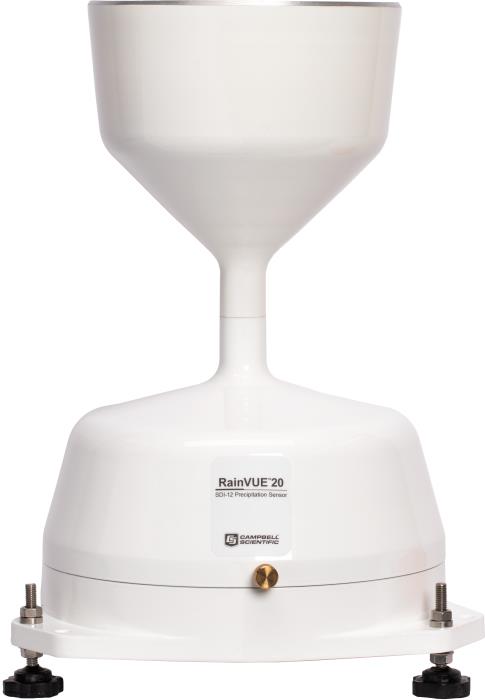 The RainVUE 20 is ideal for many hydrological or meteorological applications such as weather stations and flood warning systems. The RainVUE™ï¸20 is an SDI-12 tipping bucket rain gage in the RainVUE family of products. Advanced algorithms and digital processing within the sensor compensate for errors caused by high-intensity rain and provide accurate precipitation and intensity measurements. Constructed of an aerodynamic powder-coated aluminum funnel, the RainVUE™ï¸20 is robust and minimizes the amount of liquid precipitation that is lost due to the effects of wind. This rain gage offers the user flexibility with the option to select from a series of set cable lengths or a user-defined cable length.

The RainVUE™️20 funnels rainfall through a stainless-steel gauze filter that traps and removes debris. The rainfall flows through a nozzle into one of the two halves of the tipping bucket. The internal tipping bucket assembly rotates around precision, rolling pivot bearings, it tips when the first bucket fills to a fixed calibrated level, and then the balance arm moves the second bucket under the funnel. A magnet attached to the balance arm actuates a reed switch as the bucket tips.

The aerodynamic design of the RainVUE 20 prevents wind from carrying the rainfall away from the collecting vessel. With traditional cylindrical rain gages, wind can reduce the rainfall catch by up to 20%. The RainVUE 20 also includes a microprocessor that corrects for rainfall intensity and outputs an SDI-12 signal.

No reviews were found for RainVUE20 - Model SDI-12 - Precipitation Sensor with Aluminum Funnel. Be the first to review!