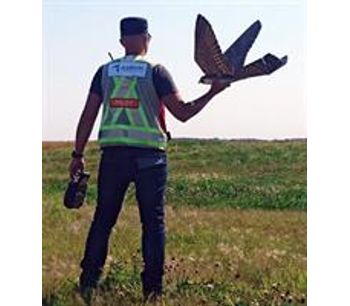 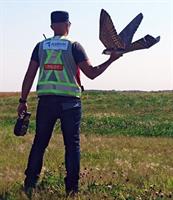 Our Robird® is a truly unique remotely controlled robotic bird of prey, with the realistic appearance and weight of its living counterpart. Robird® uses flapping wing flight as a means of propulsion, with a flight performance comparable to real birds. Based on nature itself, the Robird® offers new and exciting possibilities in bird control. By triggering the instinct of birds, through the combination of silhouette and wing movement, chasing off birds becomes fully controllable. We make sure that the man on the ground is in control of what happens in the air. We have developed two types of Robird®: the falcon, which can be used to chase off birds up to 3kg, and the eagle to chase away any type of bird.

The peregrine falcon is the world’s most widespread bird of prey, its breeding grounds ranging from the Arctic tundra to the tropics. They are the fastest animals on Earth, capable of reaching speeds beyond 320 km/h while diving for prey. The peregrine falcon feeds almost exclusively on medium-sized birds such as gulls, pigeons, songbirds, waterfowl, etc. It is also known for hunting smaller birds of prey such as kestrels. The Robird® version of the peregrine is just as intimidating to birds as the real deal. After a couple of flights, the bird population understands that they are living in a dangerous hunting territory, and will take their business elsewhere.

Eagles are ranked at the top of the food chain in the avian world. They are the biggest and most powerful birds of prey, apart from some vultures. Most eagles are opportunistic hunters who will hunt many different types of prey, ranging from birds and fish to the occasional small deer. Since the eagle is at the top of the food chain, prey selection is mostly determined by the local availability of prey species. Geese, gulls, swans and other waterfowl are typical avian prey but eagles also hunt pigeons, ravens, crows, other birds of prey such as falcons, kestrels, hawks and herons.

Why the Robird is the most effective way of bird control

When a predator is introduced in an ecosystem, the system will adapt to the new circumstances. Birds will learn to avoid the active hunting grounds of a bird of prey, with bird numbers dropping by as much as 50% or more, depending on the location and surroundings. Because the Robird® triggers the instinct of birds, there are no chances of habituation in the long term. There are currently no other means available in battling the nuisance of birds, that have such high success rates as the Robird®.

No reviews were found for Robird - Remotely Controlled Robotic System. Be the first to review!