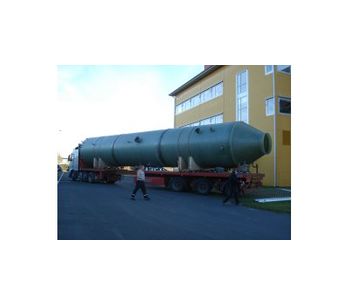 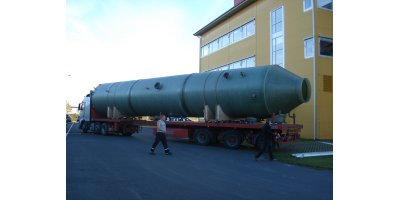 A common way to clean gases today is to wash the gas with water. By adjusting the pH in water, any impurity can be selected to be absorbed to a certain extent. Through this sorting, the pollutants can be separated and disposed of in the easiest possible way.

Examples of contaminants that are easily removable...

Examples of contaminants that are easily removable by scrubbing:

To maximize the separation, multiple scrubbers can be connected together in a series, alternatively be built into the same column as different stages.

Scrubbers are especially used where gas cleaning is prioritized over heat recovery or where gas is so corrosive that only the toughest of materials can be used. However, it is possible to combine the separation of a scrubber with heat recovery.

Function of a Scrubber

Before the scrubber, the gas is adiabatically cooled in the quench through water rinsing. The sensible heat is transferred to the latent heat which is eventually recovered through condensation. In this step, some particles and some highly soluble substances are separated. The pretreated gas is taken into the bottom of the scrubber where it is met by a steady fluid flow. To maximize the efficiency of purification of the gas, equipment is used to enlarge the contact surface between the different media. Commonly used column packing, but other way is to use spray nozzles which spray the liquid into very small droplets. After the scrubber, any liquids droplets are separated with a droplet separator. The dirty water is reused to some extent. The remaining water bleeds out the system and is treated in some form of water treatment.

No reviews were found for Scrubber. Be the first to review!