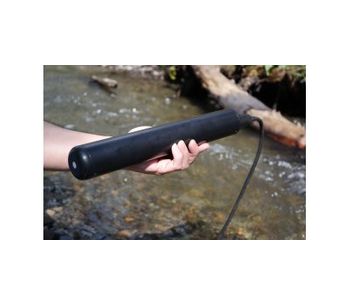 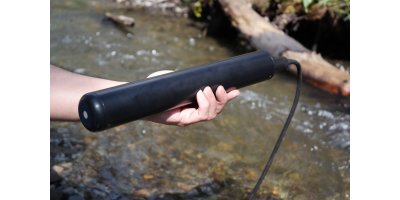 This is a new type of sediment sensor, superior to...

This is a new type of sediment sensor, superior to optical backscatter sensors (OBS) for 4 reasons.

The LISST-ABS is easy to integrate into existing sensor platforms. Click here for simple version of how it works, or here to get a detailed explanation.

The LISST-ABS is a single-point monitoring sensor. It uses a new and novel technique to internally compensate for geometric beam spreading and attenuation, yielding de-attenuated backscatter signal strength. It is held pointing into flow for low drag.

Why acoustics? Why single-point, and why 8 MHz?

Acoustic sensors benefit from their much higher tolerance to fouling than optical sensors, which is an obvious advantage. Single-point use makes them suitable for monitoring wherever turbidity type sensors are in use. The choice of 8MHz frequency is made to ensure nearly flat response to particles in the size range 30-400 microns.

For example, LISST-ABS maintains calibration over a size range 30 to 400 microns within ~ ±30% from its mean value (thin black line). In contrast, sensitivity of optical turbidity sensors changes by ~ ±400% over the same size range.

No reviews were found for Sequoia Scientific LISST-ABS - Submersible Acoustic Backscatter Sediment Sensor. Be the first to review!