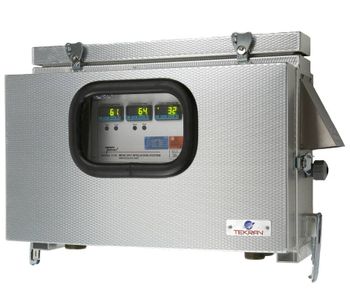 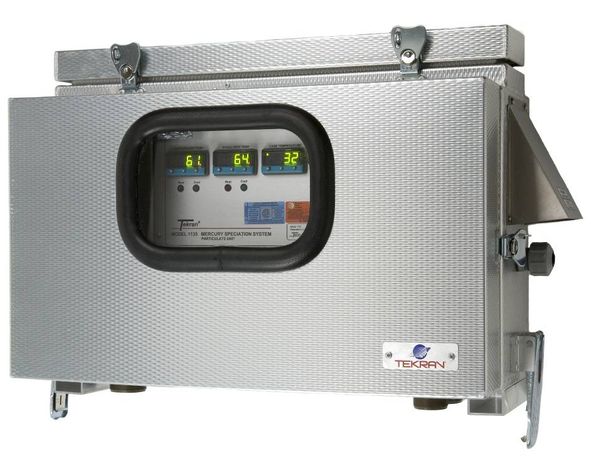 The Tekran Model 1135 Particulate Mercury Module connects seamlessly to the top of the Model 1130 to continuously monitor ambient air particulate bound mercury (HgP), gaseous oxidized mercury (GOM) and gaseous elemental mercury (GEM). The complete Tekran 2537-1130-1135 Atmospheric Mercury Speciation System provides fully automated, unattended operation to determine all three mercury species concurrently. It is the only system available which has this advanced capability to routinely measure part per quadrillion mercury speciation in ambient air. Measurement of Hgp with the Tekran Model 1135 is the important link connecting deposition of air mercury to sensitive aquatic ecosystems. Emissions of Hgp from point sources, in-situ production and transport can result in locally enhanced mercury deposition. Thus, air speciation of mercury is of particular interest close to industrial sources. Networks around the world have chosen the Tekran 1135 for mercury speciation monitoring in air.

Conventional particulate sampling is not successful at separating mercury species since GOM has a high affinity for surfaces and sticks to filter media, biasing results. The Tekran 1130 – 1135 Modules solve this problem by selectively capturing the GOM fraction from the sampled air stream prior to the Model 1135 particulate mercury filter element. Analysis occurs by heating and pyrolysis to release the HgP as GEM for detection and thermally decomposing the particulate matter. Enhanced instrument status and performance is monitored using Tekran DataCom software, providing the operator with continuous quality assurance results.

Although the majority of atmospheric mercury is present in elemental form, differentiation among the three types is important due to the widely varying local impact of each type. (Particulate and reactive gaseous mercury have higher wet and dry deposition rates than does elemental.) Ambient air speciation is of particular interest close to industrial sources such as waste incinerators, which often discharge the majority of their mercury emissions in particulate or ionic form. The Tekran speciation system has also been used in Polar Regions to delineate the conversion of elemental mercury to other forms during polar sunrise.

During sampling, the coarse particle fraction (> 2.5 um) is captured in a heated impactor so that they do not enter the system. Reactive gaseous mercury species in the atmosphere are then captured in the Model 1130 Denuder Module. The fine fraction particulate bound mercury species are then trapped onto a unique quartz regenerable filter located within the Model 1135. Elemental mercury passes through both units and is continuously analyzed by the Model 2537.

The sampling period and flow rate are programmable...

The sampling period and flow rate are programmable, and are usually set to be in the range 30 minutes to 3 hours at 10 L/m. These long sampling times and large flow rates are required to accumulate enough material for analysis.

Analysis Phase
The various sensing elements are sequentially desorbed during the analysis phase. The analytical cycle consists of the following steps.

1 - Zero Flush
The sampling system is flooded with zero air. This zero air acts as a carrier gas during subsequent analysis steps.

2 - Pyrolyzer Preheat
The pyrolyzer is heated. This will convert to elemental form any mercury compounds that are eluted during subsequent steps.

3 - Particulate Trap Desorption
The regenerable particulate trap is heated. This desorbs the particulate bound mercury captured on the trap. The Model 2537 quantitates the mercury released during this step. The heating process also reconditions the trap for subsequent cycles.

4 - Annular Denuder Desorption
The denuder is then heated, releasing the RGM that was trapped during the previous sampling period. The pyrolyzer and particulate trap continue to be heated during this step, allowing the eluted mercury to pass through without losses.

4 – Zero / Cool Down
The sensing elements are cooled and post-analysis zero levels are determined.

Tekran provides a Windows based application, Combine with every Model 2537. This program provides proper time alignment for any set of data readings, inserting appropriate gaps during periods of no data and combining results from several capture files. Combine also separates data based on the status of the speciation system. Readings for RGM, HgP and Hg0 can be placed into separate columns, making subsequent processing by spreadsheet or database programs straightforward. The system gives a true simultaneous determination of the three species.

No reviews were found for Tekran - Model 1135 - Particulate Mercury Module. Be the first to review!