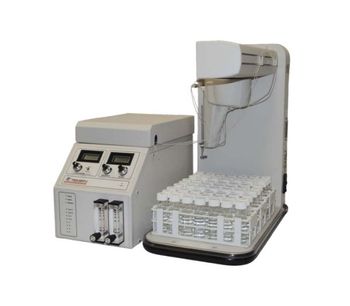 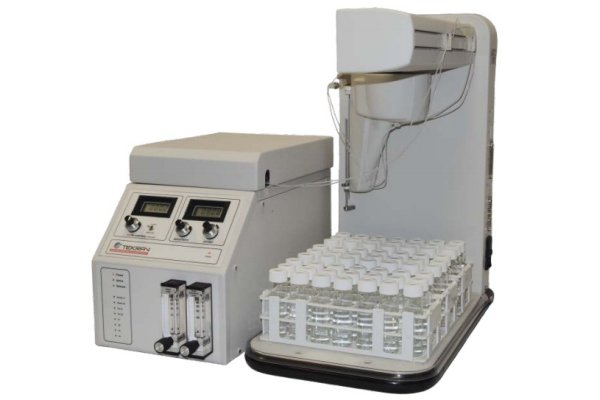 The Tekran 2600 Automated Total Mercury Analyzer allows analysis of a wide range of environmental matrices. The instrument has a modular design with unique “Top Deck” components allowing fast user switching between analytical methods such as EPA 1631, EPA 245.7, and EPA IO-5. The Tekran 2600 utilizes a CVAFS detector capable of measuring sub-picogram quantities of mercury. With our highly-regarded Tek-MDS-2 software package, the Tekran 2600 is easy to use, simple to maintain, and quick to set up.

The IVS configuration utilizes direct sparging of Hg from samples vials, enabling gas-only sample pathways for cleaner operation and lower carryover. The Series 2600 is capable of providing a fully automated implementation of EPA Method 1631. This method is capable of measuring waters and digested solids with detection limits over 10X lower than required.

The Tekran Series 2600-IVS is the most stable, sensitive ultra-trace mercury analyzer available today. It was designed to be easy to set up, easy to use, and easy to maintain. The Series 2600-IVS CVAFS Mercury Analysis System has a number of unique features that increase its performance and flexibility. The standard system is equipped with the same detector as is used in our Model 2500. The Model 2500 Atomic Fluorescence Detector is renowned for its sensitivity, low noise and stability

Before Delivery
Before shipment, every Series 2600 system is exercised for several days in our labs. Each and every unit is fully tested to demonstrate an MDL of < 0.05 ng/l before being shipped. This is a factor of four lower than EPA requirements. Others may claim a low MDL. Tekran actually delivers … day after day. In clean room environments, with low mercury blanks, MDL’s as low as 0.02 ng/l are routinely achievable. We have a Pre-Delivery Guide, to help you prepare your lab before the system arrives. We provide lists of preferred, low mercury reagent suppliers to minimize start up time.

Easy to Set Up
The Series 2600 assembles for operation in only minutes. A step by step Quick Start Guide will have you up and running in no time. Unlimited, free telephone support is available, in the event you require assistance. (Toll free in the US and Canada.)

Ongoing Assistance
Tekran is here to assist you every step of the way. For instance, once you are up and running, you may find that your blanks are too high. Tekran’s various Method Analytical Guides and our phone support will assist you with these and any other analytical issues you may encounter.

Free Factory Training Courses
Tekran provides periodic factory training courses for customers. These courses are provided at no charge and provide comprehensive information on how to actually run low level samples in your laboratory. They detail methods to reduce background levels and cross contamination as well as demonstrating instrument maintenance and basic repair operations. On site training can also be arranged for a nominal fee. Customers with previous trace metals analytical experience generally do not require these courses.

Simple to Maintain / Low Cost of Ownership
Tekran equipment is routinely used in some of the most remote, inhospitable places on earth. For example, researchers have used the Series 2600 in the high Arctic to perform snow sample analysis. These scientists are often capturing unique events that occur for only a few days per year; so reliability is of prime importance. Downtime and service calls are simply not an option. All Tekran products are designed to be easily serviceable by the analyst. Keeping a few spare parts on hand will reduce your downtime to virtually zero.

All flow path components (tubing, cartridges, heaters, traps, Teflon lines, etc.) are user replaceable without tools. All of these parts are accessible from outside the instrument. Infrequent operations such as lamp changes are easily performed.

Reliability doesn’t count for much if the analyzer gives you the wrong answer! The Series 2600 has design refinements and elements that give it unsurpassed analytical performance. Some of these may seem obvious, but no other system incorporates all of these features.

The AF detector in the Series 2600 provides extraordinary sensitivity, stability and selectivity. The graph at right shows a typical 0.5 ppt peak. Note the smooth profile and very low baseline noise. A high resolution (24-bit) A/D converter allows accurate quantitation of peaks ranging from less than 0.1 mV to over 1300 mV in height.

The detector achieves this performance by having a number of unique features. The lamp is temperature controlled. An optical feedback arrangement ensures constant lamp intensity over the course of the run and from day to day. The entire optical path is purged with argon. (Air in the optical path will cause sensitivity and baseline shifts since ozone, ozone precursors, or other UV absorbing compounds may be present.) The detector uses a high sensitivity photomultiplier, rather than a cheaper photodiode UV sensor.

The Series 2600-IVS is designed to use direct sparging of mercury from the sample vials using a custom septum piercing probe. With direct sparging, the need for a separate gas/liquid separator is completely eliminated. Also eliminated is the need for a pumping system to move liquids though the system. The overall design is greatly simplified with fewer moving parts and simplification of sample introduction. This reduction in components translates to lower instrumentation cost, as well as reduction is operation cost. The absence of liquid transport greatly improves performance and extends the life of downstream elements. For Method 1631 (gold pre-concentration), it means that the lifetime of the first stage gold cartridge is substantially extended due to the absence of aerosols.

Mass flow Controller
A constant carrier gas flow is vital to long term stability of the analyzer. The Series 2600 incorporates a mass flow controller (MFC) to ensure constant, repeatable analytical flow. (A mass flow controller consists of a thermal flow sensor, proportional valve, and closed loop feedback control circuit to ensure that the actual gas flow is always the same as the setpoint flow.) Tekran’s MFC flow system is far superior to the flow restrictors or rotometers used in other analyzers.

Flow Path
The Series 2600 uses only gas phase flow switching. Some other analyzers use valves to switch between the sample and wash water liquid streams. This is an ongoing source of difficulties, especially when running unfiltered samples. Switching the liquid phase with a valve can cause the following problems:

Except when actually loading the first stage catridge with mercury, the Series 2600 vents gas from the phase separator to the outside air rather than simply passing it downstream. This keeps the analytical system clean, ensuring trouble free operation for extended periods.

Some customers are using the Series 2600 to perform fractionation of biological samples (e.g. fish and hair) into mercury species. By altering the reagents and on-line reduction chemistry, the Series 2600 can be configured to measure either total mercury or inorganic mercury fractions. Organic mercury (methyl) is determined by difference. A simple, common digestion procedure is used prior to running both fractions. This approach is useful for certain matrices and avoids the lengthy and complex distillation, ethylation and GC separation required for low-level methyl mercury analysis.

Recording and Logging of Internal Instrument States
The Series 2600 records a number of internal instrument variables and stores these results for each analytical run. Some of the parameters measured are:

This information provides a permanent record of the instrument parameters most vital to performance. It greatly simplifies troubleshooting and provides advance notice of potential problems.

Sample Carryover and Auto-Flush Function
The Series 2600 has been designed with a number of features to minimize sample carryover. If you encounter an unexpectedly high sample that could result in carryover, the system Auto-Flush Function will automatically suspend sample analysis, perform exactly as many cleaning/flushing cycles as needed to eliminate residual contamination, and then resume processing your batch.

To further reduce contamination between samples, a Rinse tube containing an acid rinsing solution may be specified to run automatically after each sample. This feature does not increase the analytical time per sample and dedicating only one tube per rack of 12 samples provides sufficient solution for rinsing. This rinse step is in addition to the normal recirculating wash station function.

Automatic Shutoff
The analyzer will automatically purge itself and shut off all gases and reagent use after the final sample is run. Unattended operation is safe and routine.

Tekran 2621M Auto Sampler
Interfacing with the 2600 detector, the new 2621 auto sampler is a state of the art, featuring an integrated wash station, dedicated rack for standards, and a small footprint. The unit can hold a maximum of 120 samples at a time, with the ability to run a combination of up to three 'fold down' trays containing either twenty-one 30mm vials or forty 20mm vials.

Flexibility
Even if you plan on miming only compliance wastewater samples initially, you will appreciate the flexibility of the Series 2600. The analytical earner gas flow, pump speed, valve configuration and heater temperatures are all set in user configurable event tables. Users can create and edit as many of these analytical cycle tables as desired. Opto-isolated event trigger outputs allow control of external equipment. For example, some customers connect the detector cell output of the Series 2600 to a mass spectrometer, allowing isotopic abundances of their trace samples to be measured. Moreover, the top-deck method design of the Series 2600 allows you to switch analytical methods in a couple of minutes. The Series 2600 can also be converted to cany out analysis of air (IO-5) and natural gas samples.

No reviews were found for Tekran - Model Series 2600 - Flow Based Configuration Automated Sample Analysis System. Be the first to review!