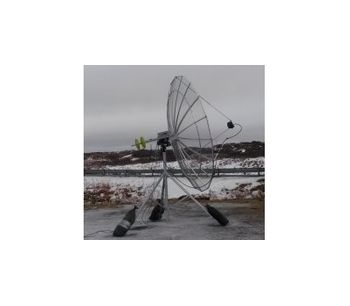 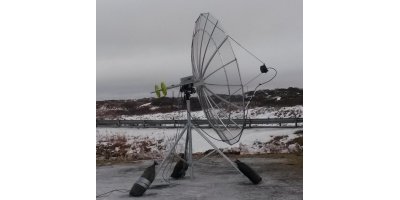 Ground stations are one of two main components of our telemetry system.

At the operation of free flying measuring probes, the scientist always faces the same question:
How do I get the measured data of my system?

There are two solutions:

Our ground stations, together with our transmitters, form a closed data transmission system. The communication is done over a coded radio network, so only our ground stations are able to work with our transmitters and vice versa. To reduce the technical effort for the user these two main components are available as complete packages, which contain all necessary parts and functions to operate a probe with this telemetry.

The system has additional unused resources, like internal hardware interfaces, which are reserved for future expansions.

If you have special wishes, don't hesitate to contact us! We are willing to discuss about additional functions any time.

Our ground stations, or the entire telemetry system, was designed to operate where large among of data have to be transferred between two places over a long distance, but no local infrastructure is available or not intended to be used. A concrete example are measurement systems on board of free flying research balloons, which measured data have to be transferred to the user on the ground directly.

These balloons fly at altitudes of over 30 km and mostly over inaccessible areas, like mountains or oceans. So there is no possibility to fall back on mobile networks for example. Satellite based solutions are conceivable, but their data transmission rates can suffer from dynamic fluctuations (from band width redistributions by the provider).
In contrast to that, our system provides a direct data link in both directions (up- und downlink) with a transmission delay of just a few 100 msec.

For the operation of our system, some requirements have to be fulfilled:

The following describes some typical operation scenarios (see also the application part of our transmitters):

1. Simple flight of a research balloon with recovery after touchdownSituation: research flight with balloon and recovery of the measurement instrument afterwards.

2. Flight of a research balloon with selective landing and recoverySituation:research flight with balloon and recovery of the measurement instrument afterwards. The landing point forecast is located in an area with large expanse of water, like if the balloon fly's from land in direction of an ocean.

3. One-way flight of a research balloon without recoverySituation:research flight with balloon, launched at the coast line and flight direction to the open sea.

4. Long range flightSituation:research flight with balloon,wherein the trajectory forecast shows a much longer flight distance than the max. range of a telemetry station

5. Network of ground stationsSituation: During a long time campaign a big number of research flights should be started from a fix launch area, wherein the trajectories can vary widely

The telemetry system features standardised interfaces for data exchange, controls, supply and antennas, so it's potentially usable in other fields of application also.

No reviews were found for Telemetry Ground Station. Be the first to review!