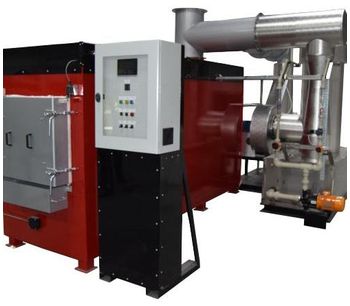 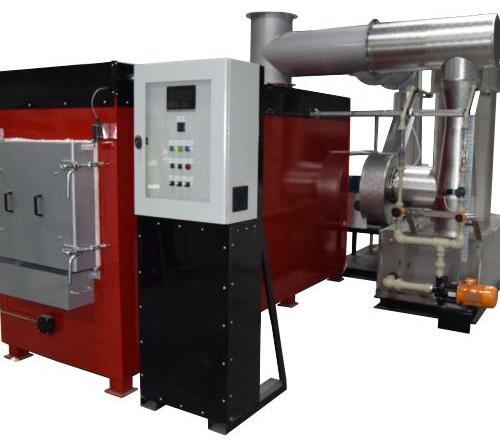 The Addfield wet scrubber system is primarily designed as particle suppressant system, ideally suited to high capacity incineration machines. Heavy particulates are removed from the exhaust gas using water injected from the roof of the scrubber system. This bolt on system can be added to any incineration machine in the Addfield range and is scaled according to the specific application. Constructed from a stainless steel the vessel encapsulates multiple water spraying nozzles.

Incoming gasses are cooled prior to entering the scrubbing chamber. When incinerating waste containing halogenic compounds – often found in medical waste streams, an incinerator secondary after chamber will be operating at above 1100°C. This ensures thorough oxidations of flue gasses, dioxins and furans. When found in large quantities, dioxins reformation can occur at around 900°C. A sudden temperature crash will limit this reformation process. This sudden temperature drop happens prior to the gas stream entering the bottom of the scrubbing tower.

The gas stream will traverse upward, while liquid is sprayed downward into the incoming gas stream. This countercurrent flow exposes the outlet gas the lowest pollutant concentration to the freshest scrubbing liquid.

The smaller the droplets formed, the higher the collection efficiency achieved for both gaseous and particulate pollutants. However, the liquid droplets must be large enough to not be carried out of the scrubber by the scrubbed outlet gas stream as steam. Therefore, spray towers use nozzles to produce droplets that are usually 500–1000 μm in diameter. The gas velocity is kept low, from 0.3 to 1.2 m/s (1–4 ft/s) to prevent excess droplets from being carried out of the tower.

The primary function in which the wet scrubbers operate is to cause dust particles to attach to the water droplets. This contact occurs in three phases, these are:

The direct impact of a particle with a water droplet, thus removing it from the emission gas stream. When the velocity between the two objects is relative this typically occurs.

If a faster particle is not large enough to impact as water droplets, this gas particle may attempt to go around a slower or stationary object. As it does, its inertial energy will slow subsequently it is likely to impact a following water droplet in a scrubber system thus removing it from a the emission gas stream.

Occurring in in particles typically less than .3 micron this process provides higher collection than would otherwise be expected due to the mixture of inertial impaction and Interception.

Calcium carbonate can also be added to water, with the resulting slurry sprayed into a flue gas scrubber. The process is found to be more efficient if a calcium hydroxide/water slurry is used, removing over 95% of Sulphur dioxide. The Sulphur dioxide is absorbed into the spray and precipitates as wet calcium sulphate. By re-circulating the slurry and injecting oxygen, calcium sulphate (gypsum) is formed which can be sold as a by-product. CaSO3 0.5H2O + 0.5O2 + 1.5H2O -> CaSO4 . 2H2O

Advantages of a Venturi System No reviews were found for Venturi Scrubber Incineration Exhaust Filtration System. Be the first to review!