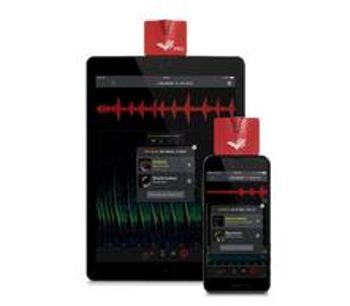 Flying at night, using ultrasonic vocalizations — bats can be hard for people to detect. But with the sophisticated technology inside the affordably priced Echo Meter Touch 2, you can turn your smartphone or tablet into a professional-quality, interactive bat detector, allowing you to hear and record bats flying above you in real-time!

Echo Meter Touch 2 can detect and identify the most likely species of bats in your area.

There are thousands of bat species in the world, each with its own slightly different type of echolocation call. Every time you watch for a bat, Echo Meter Touch listens for it and processes the sound using highly complex, proprietary algorithms called “classifiers”. In a split second, Echo Meter Touch shows you the most likely species of bat flying overhead. You can click on each species to learn more. Currently, Echo Meter Touch detectors can identify bat species from North America, the Neotropics, the U.K., Europe and South Africa. Full List

Discover the world of ultrasonic sound.

Bat echolocation calls are ultrasonic – out of the range of human hearing. The Echo Meter Touch bat detector combines a special microphone with sophisticated circuitry and software to transform ultrasonic bats calls into audio that you can hear. Echo Meter Touch displays the bat calls on an interactive, scientific-level spectrogram. You can pause the audio, zoom in on each recording, and listen to it in more detail using one of three professional-level listening modes: Real-Time Expansion, heterodyne, and post-recording time expansion.

No reviews were found for Wildlife - Model Touch 2 - Echo Meter for Android. Be the first to review!