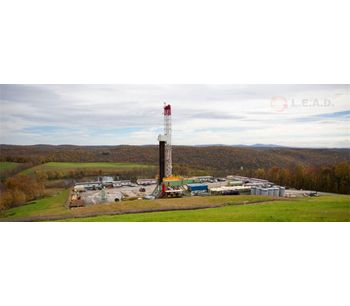 L.E.A.D. has developed advanced fracturing liquid and acidizing fluid systems, proppant, fracturing and acidizing techniques, and matching software, which have been successfully applied in different downhole geological and engineering conditions.

L.E.A.D. has developed advanced fracturing liquid and acidizing fluid systems, proppant, fracturing and acidizing techniques, and matching software, which have been successfully applied in different downhole geological and engineering conditions.

Under the same fracture conductivity, high-sand-ratio fracturing creates shorter fractures and requires lower costs. Therefore, it has a promising application in water-flooded oilfields, as well as reservoirs with medium-to-high permeability.

Fracturing strings consisting of hydraulic expanding packers and sliding-sleeve sand blowers are used to fracture 1-3 intervals in a single top down trip without moving the strings. This technique is applicable for oil reservoirs with high, medium and low permeability.

Special downhole tools are employed, which, from within the casings, to create fractures along horizontal intervals in a staged manner. Slant holes are also fractured with special downhole tools, realizing fracture treatment along the well bores with a slant of 3-50°.

This fracturing process uses temporary-plugging agents to provisionally shut off the high-permeability layers in a well segment before fracturing other layers, which seems to be 'selected' for fracturing. It is a technique applicable to thick anisotropic oil reservoirs or oil reservoirs with quite different interformational properties.

Liquid carbon dioxide and water-based fracturing fluids are mixed together and pumped into wells for fracturing and stimulation. This kind of fluid for fracturing minimizes reservoir damage, thanks to its minimal residue, high backflow percentage, little leakoff, and plug removal under faint acidity. It is suitable for the treatment of oil and gas wells in low-permeability and tight formations.

Prepad chemicals react and generate heat to increase the temperature in fractures and reduce the flowing resistance of crude oil, thus improving the treatment results. This technique is applicable to the treatment of low-permeability formations with viscous crude and high paraffin content.

With low perforation density and a large supply flow of fracturing fluid, sufficient perforation frictional resistance can be created to simultaneously treat up to five formations with similar breakdown pressures. This technology is suitable for the completion and fracturing of oil and water wells with multiple oil layers, thin interbeds and low permeability, which allows for low-density perforation at fixed locations.

Design of fracturing process and parameters

No reviews were found for Acid Fracturing Technical Services. Be the first to review!