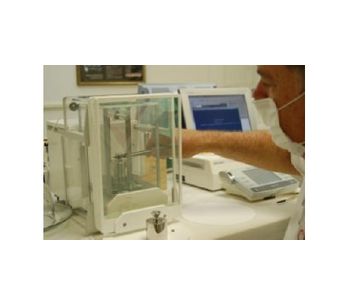 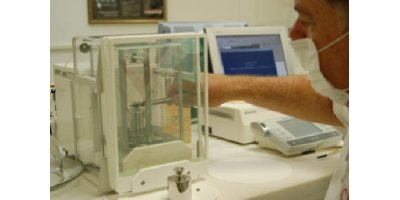 CALIBRATION: The set of operations which establish, under specified conditions, the relationship between values indicated by a measuring instrument ....,  and the corresponding known values of a measurand.

What does calibration of a laboratory weight entai...

What does calibration of a laboratory weight entail?

Environmental control: The laboratory in which the calibration takes place must be CLEAN and temperature and humidity controlled.  Temperature control (stability of the room temperature) is critical; Echelon 1 calibration requirements specify that temperature may not drift more than 0.5C per hour.  Air is filtered through HEPA filters.  Sources of vibration are eliminated.  Temperature, relative humidity, and atmospheric pressure must be accurately measured in order to precisely calculate the air density, as the buoyant effect of air on the reference weight and the client's weight must be calculated and accounted for in the weighing process.

The right measuring equipment: We measure temperature inside the weighing chamber of each comparator with standards-grade thermistor sensors (accuracy +/-0.02oC) connected to a Hart Scientific Black Stack readout.  The temperature is measured before and after the weighing of each weight and the average is used, along with atmospheric pressure and humidity, to calculate the air density.  We use a calibrated GE Druck digital pressure calibrator to read atmospheric pressure to .01 mm of mercury, and a Vaisala digital humidity meter to measure humidity to better than 1%.

No reviews were found for Mass (Laboratory Weight Sets) Calibration Services. Be the first to review!