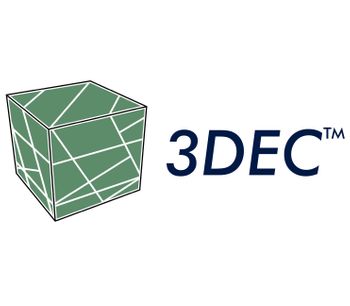 3DEC is a three-dimensional numerical modeling code for advanced geotechnical analysis of soil, rock, ground water, structural support, and masonry. 3DEC simulates the response of discontinuous media (such as jointed rock or masonry bricks) that is subject to either static or dynamic loading. The numerical formulation It is based on the distinct element method (DEM) for discontinuum modeling. UDEC is the two-dimensional version.

The discontinuous material is represented as an assemblage of discrete blocks. The discontinuities are treated as boundary conditions between blocks; large displacements along discontinuities and rotations of blocks are allowed. Individual blocks behave (based on constitutive and joint models) as either rigid or deformable (i.e., meshed into finite difference zones) material. Continuous and discontinuous joint patterns can be generated on a statistical basis. A joint structure can be built into the model directly from the geologic mapping. 3DEC also contains Itasca's powerful built-in scripting language FISH. With FISH, you can write your own scripts for users who wish to add functionality for custom analyses.

3DEC has been developed primarily for geotechnical engineering applications in the fields of civil, mining, and energy generation. 3DEC is also a valuable tool used for research in rock mechanics, stability of masonry structures, and the behavior of granular systems. Although, through scripting and custom constitutive models, the possibilities are virtually limitless.

Options in 3DEC are sold separately from the general license, allowing users to select the program’s capabilities as meets their own analysis needs without having to purchase all features. Beginning with 3DEC Version 7, the Finite Element Structural Liners option is now included at no additional charge.

3DEC is ideally suited to analyze potential modes of failure directly related to the presence of discontinuous features. Work with either discrete blocks, zoned continuum, or both.

The software can be extended with four options (dynamic, thermal, Finite Element (FE) liners and blocks, and C++ User-Defined Constitutive Models) that are offered separately from the base program (see Options for more information).

3DEC simulates the nonlinear response of a system (soil, rock, and structures) to excitation from an external (e.g., seismic) source or internal (e.g. vibration or blasting) sources. It can reproduce the evolution of permanent movements due to yield. This option models the full dynamic response of a system in the time domain. Capabilities include specification of velocity or stress-wave input, quiet (i.e., viscous) boundaries, free-field conditions (ideal for earthquake simulation), and damping.

Problems such as seismic loading, explosive loading, seismic release of energy, and flow of particles may be modeled.

Two types of damping are available in 3DEC: mass-p...

In 3DEC, the dynamic input can be applied as either a prescribed velocity history or as a stress history. An acceleration history needs to be integrated numerically first to produce a velocity history for 3DEC.

Thermal Analysis
The thermal option in 3DEC allows the simulation of transient heat conduction. There are two separate formulations of the thermal logic. The first is a numerical formulation using the explicit or implicit finite difference method. This method is more accurate for short times, and includes thermal-mechanical fluid coupling. The second is an analytical formulation that uses superposition of point heat sources* in an infinite medium. This method is suitable for long thermal times, and is very fast.

Comparison of features available with numerical vs analytical formulations.

*Point heat sources may be placed individually, in...

*Point heat sources may be placed individually, in lines, or in grids, to represent point, line, or plane sources of heating. This formulation yields rapid calculations, correct application of mechanical boundary conditions, incorporation of the infinite thermal boundary,and the ability to use inhomogeneous and anisotropic mechanical properties.

Modeling cables and beams is part of the standard functionality of 3DEC. This option adds the ability to model tunnel liners and external structures (such as dams, bridges, walls, buildings, etc.). The tunnel liner logic automatically places equally spaced triangular-shaped plates on the inside surface of an excavation or tunnel. External structures can be modeled using finite elements that are attached to the 3DEC model.

User-defined constitutive models can be written in C++ for both zoned block materials and joint materials. These are compiled as DLL files that can be loaded whenever needed with this option. Microsoft Visual Studio 2010 is used to compile the DLL files. The main function of the constitutive model is to return new stresses, given strain increments. However, the model must also provide other information (such as name of the model and material property names) and describe certain details about how the model interacts with the code. Itasca maintains an online library of UDM C++ models where users can submit and download novel and useful constitutive models.

No reviews were found for 3DEC - Version 7.0 - Three-Dimensional Numerical Geotechnical Software. Be the first to review!