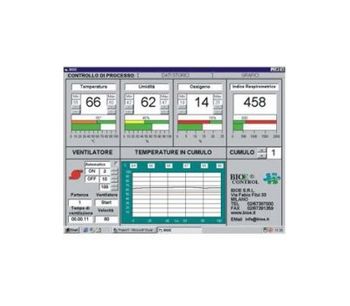 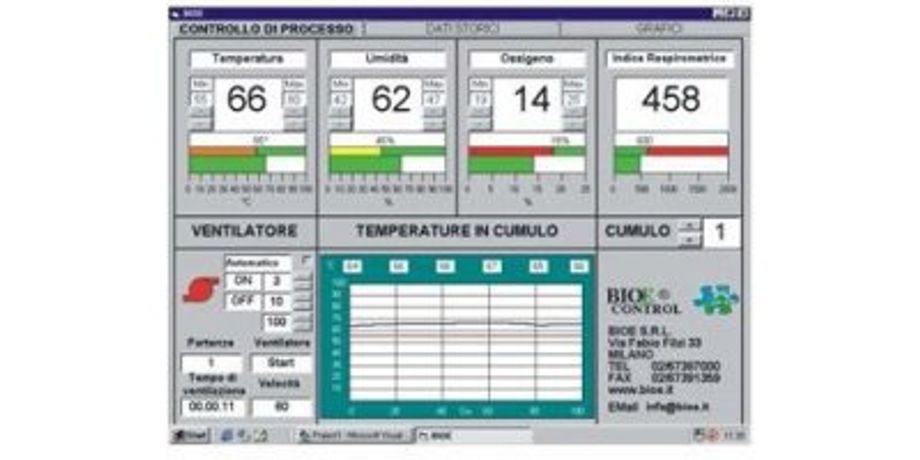 BIOE Control is a dedicated software developed to control and manage the BIOE process for the correct bio-conversion of solid waste, landfills post mortem residual, water treatment plant sludge, food industry waste. The software has been completely realized with 32 bit protocol as to guarantee the total compatibility with the common PC operating system, performing also a program running higher security. The control system allows to work in different conditions, avoiding errors which could prejudice the important role of the BIOE process. The program provides a graphical interface studied to optimize the monitoring and management work.

The BIOE Control is composed by 5 parts:

The BIOE Control is composed by 5 parts:

A dedicated probe is controlling the temperature profile in the static heap. The stainless steel probe, equipped with 4 sensors, measures the temperature inside the heap. The sensor range is between 0 and 100°C and they ar e installed in the probe with a pitch of a 20 cm. The probe, sending the data to the central unit, runs the insufflation and allows to set in the heap the higher temperature limit.

The humidity control in the heap is made by a specific probe which is able to provide a continuous humidity measurement. Its range is between 0 and 100% with a sensibility of 1% and linearity of 2%. The probe, transmitting the data to the central unit, participates to the management of the bio-conversion process and guarantees the maximum leakage reduction.

The oxygen control is made by a specific probe which is installed in the heap and permits constant revelations and the optimal oxygen concentration management. The probe range is between 0 and 21%, with a precision of 0,5% and a resolution of 0,1%. The probe operates the bio-conversion by transmitting the data to the central unit and allows the optimal oxygenation of the material through a specific insufflations system, avoiding the formation of anaerobic zones.

No reviews were found for Bioe - Control System Software. Be the first to review!