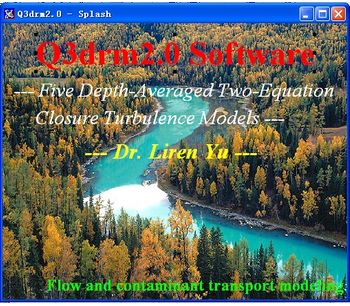 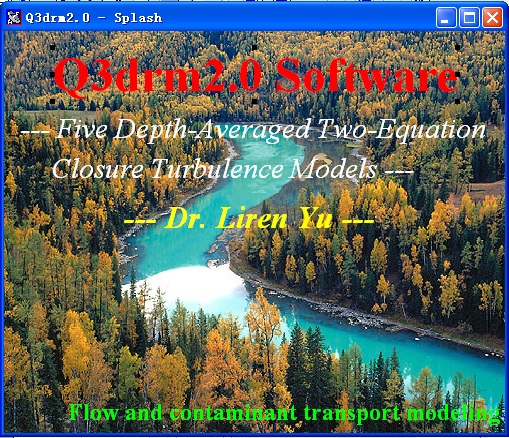 Share Share with Facebook Share with Tweeter Share with LinkedIn
Current quasi 3D simulation software in the world market (such as SOBEK and MIKE, etc.) failed to reflect the recent progress of turbulence model theory, and only can provide users with a traditional depth-averaged turbulence k-ε model with more than 40 years. The developed refined simulation software Q3drm2.0, however, is the only advanced computational fluid dynamics (CFD) software in the world that can provide users with five depth-integral (depth-averaged) two-equation turbulence models to close quasi 3D hydrodynamic model (shallow waters model). Providing multiple two-equation turbulence model closures, which is in line with the development trend of CFD software, not only enables users to make full use of the new achievements of turbulence model theory, but also greatly improves the reliability of users’ calculation results.

1. Depth-averaged k-ε Model, which was offered by McGuirk and Rode from ‘standard’ k-ε in 1977.

2. Depth-averaged k-w Model, which was build by the author of this software in his 1988’s PhD Thesis, according to the ‘standard’ k-w model, proposed by Ilegbusi and Spalding in 1982.

3. Depth-averaged k-ω Model, which was established by the same author in 2009, according to the famous ‘standard’ k-ω model, proposed by Saffman but popularized by Wolcox in 1998.

4. Depth-averaged RNG k-ε model, which was recently built by the author of software, according to the ‘standard’ RNG k-ε model (Yakhot et. al., 1992).

Q3drm2.0 can be used to simulate, predict and analyze various scientific and engineering problems in shallow waters, such as open channels, the middle and lower reaches of rivers, lakes, reservoirs, cooling pools, estuaries and coastal arears. These problems are closely related to flow, mixing, and the discharges and transports of contaminants and waste heat, e. g. river pollutions, accidental discharges, water resources security, water environment protect, environmental engineering/assessment, comparison between different schemes for water supply and drainage, as well as the impact analysis of discharges on channel safety and so on (covering water conservancy, environment, energy, port and waterway, civil engineering and other fields).

●Single-layer or multi-layer grids may be smooth/non-smooth; transverse grid nodes may be uniform/non-uniform; and grids may be orthogonal/non-orthogonal.

●To provide users with a function of trial calculation for determining the depth-averaged velocity profile at the mainstream entrance section on each layer grid，which obeys the exponential distribution.

●In addition to conventional wall-functions for vertical bank boundary, Q3drm2.0 software also provide the skills for estimating approximately the wall-functions in the regions with sloping bank.

●The software focus on the refined simulations of flows and contaminant transports in complex shallow waters, including meandering riverbanks, multiple islands and bifurcated inlet.

●The software can deal with various discharge schemes of pollutant and waste heat, encountered frequently in engineering, including side-discharge, point-source discharge and point-sink, as well as area-source discharge from the slope along bank.

●Q3drm2.0 software provide 16 repeatable computational examples to users, for which the simulations by using three or five depth-averaged two-equation closure turbulence models have been carried out on coarse and fine two-layer's grids.